Brightspear is a City of Sigmar in Aspiria in the Great Parch of the Realm of Aqshy. [1a] The city's closest neighbors are the Citadel-City of Lumnos and Steel Spike.[3c] It is governed by a Conclave, just like every other City of Sigmar that follows the example of Hammerhal and Azyrheim, but due to the tragedies brought by the Necroquake the city's Stormcast, the Celestial Warbringers, stepped in and put the city under martial law.[3a] 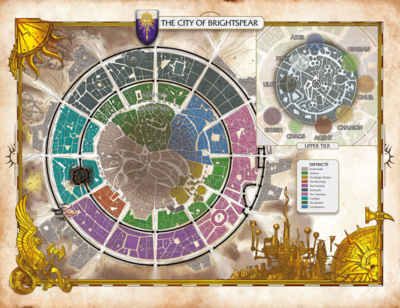 Map of the Old and New City of Brightspear

During the Age of Myth, the Arch-Domini of the Agloraxi Empire constructed a series of vast underground complexes in northern Aspiria, the greatest of these Agloraxi Citadels was known as the Great Orrery. Here, hidden from the outside world, the Agloraxi Mages conducted their strange and deviant experiments.[3a]

Secluded and immersed in their studies, the mages of the Ciradel were not prepared for when the Age of Chaos arrived in the Aspiria. Streaming out from the rift along the Disintegrating Shores came the forces of the god of change, Tzeentch. Hordes of Daemons came over the city, slaughtering its defenders. But not all oppossed the forces of Chaos. Some of the mages below were corrupted long ago and now willingly pleged themselves to Tzeentch.[3a]

In the following centuries the former Agloraxi Citadel became a stronghold for Tzeentch Daemons and Mortals alike. Conducting experiments, more depraved than even the Agloraxi ever dared. And slowly twisting and reshaping the structure of the city itself.[3a]

The Chaos occupation ended when the Stormcast Eternals of the Celestial Warbringers struck the city like lightning. The first strike came when Sigmar himself hurled a meteorite of pure Celestium from the heavens, breaking the city's walls[3b]. With their defence shattered, the warriors of Order drove out the followers of Tzeentch or forced them into hiding in the depths below.[3a] With the city liberated, and in honour of the Celestial Warbringers, it was renamed Brightspear.[3a]

Soon, the forces of Order moved in. Slowly reclaiming the city, removing the taint and corruption of Chaos and building new structure.[3a] Just as the city started to grow, disaster struck. The Necroquake animated the souls of the dead, victims of the Agloraxi and those slain by Chaos. In the end, most of the city's council were slain, and only a fraction of the population remained.[3a]

In the aftermath of this catastrophe, Lord-Arcanum Salonia Gravewing declared martial law. Until a new Chancellor can been found, she is governing the city as Sigmar's representative.[3b]

As with every City of Sigmar that came before it, Brightspear's governing Conclave is modeled after the Grand Conclave of Azyrheim. The Conclave is comprised of a total of thirty-six members, each with their own role within the city's government. The High Arbiter oversees the city's justiciary and lawmaking systems. The city's Magister of the Arcane Collegiate sits on the conclave and represents the interests of the Collegiate. Senior roles are also doled out to the Dean of Domini University and the head of the House of the Kindred Flame. The city's fortifications and other defenses are overseen by the High Artisans. The famed Valius Maliti served as High Architect, responsible for designing the city, until his untimely disappearance. A few other seats are filled by community leaders.[3a]

Tragedy almost immediately befell Brightspear's Conclave after its members were first elected to their positions, as the Necroquake broke across the Mortal Realms not long after. The undead invasion of Brightspear that came after the Necroquake claimed the lives of many of its members, including the Chancellor who headed the Conclave. After the undead scourge was beaten back, Lord-Arcanum Salonia Gravewing of the Celestial Warbringers placed the city under martial law and the Stormcast garrison has been ruling the city in all but name ever since. Many members of the Conclave believe that the Gravewing's refusal to choose a new Chancellor is a means for her to maintain control of the free city for herself.[3a]

Members of the Conclave include:

Like in most other Cities of Sigmar, the people of Brightspear, are made up of many groups of people: settlers from Azyr known as Azyrites who form much of the local upper class, local Aspirians whose ancestors built the citadel-cities, native Reclaimed, known as Ashfoots, Vitrolians from Vitrolia who have by and large turned to organized crime, Fyreslayers of the Vostarg and Greyfyrd Lodges, and many others. Collectively the people of the city are known as Spearians.[3]

There exists some animosity between these groups of people, with prejudices and derogatory terms, like 'Ashfoot' for the native Aqshians, being quite common.[3b]

While Aspirians form a large part of Brightspear's reclaimed population, they are not the only Aqshians. During the Age of Chaos, a number of refugees from nearby Vitrolia sought shelter in Aspiria. When faced with Aspirian prejudices, many Vitrolians struggled to find honest work and were forced into a life of crime to survive.

Mechanical automatons resembling beasts of burden and other animals are a common sight in the streets of Brightspear. These are used to transport goods and people across the city, especially dignitaries, and some businesses like Handa's Livery rent them out for a daily fee. The most common frames are horses, spiders, and salamanders.[4a]

A market in the lower tiers of Brightspear

Most Free Cities of Sigmar's empire are centered around Realmgates that act as major commercial thoroughfares, allowing them to become trading hubs between one or more Realms. But Brightspear has no such lucrative trade route at the heart of their city and must instead rely on the sky-vessels of the Kharadron Overlords to bring goods in and out of the city via the Highport, an enormous structure within the city that sees traffic from many sky-vessels.[3a]

Most mortals require food for sustenance and this holds true for most Spearians, so it is only natural that agriculture has become deeply tied to the economic state of the city of Brightspear. Yet farming and crop development in the Realm of Fire can be a trial even in the best of conditions, and Brightspear being located in the middle of a wasteland is far from ideal, for all but the hardiest of crops. The ancient Agloraxians developed the Hanging Gardens to fill their agricultural needs when they held dominion over the city. In the Age of Sigmar, the Spearians have continued to cultivate these gardens, providing the city with much needed crops.[3a][3b]

Even still the Hanging Gardens alone can not provide for all within the city, and maintaining the crops and their irrigation systems requires continuous work from the Jade Wizards of the Collegiate Arcane and the Ironweld Arsenal. So Brightspear must rely on their allies and trade partners to provide the food they need to survive.[3a]

Food, and other needed materials such as clothing and building material, are shipped in from all across Aqshy. These supplies are most often brought in by the sky-vessels of the Kharadron Overlords, to avoid the dangers that infest the lands such as the Undead hordes of Nagash, volatile warbands of Orruks, and the twisted abominations of the Dark Gods.[3a]

But over reliance on the Kharadron can come at a price as often time the sky Duardin charge extortionate fees or are held back by storms, so some traders will brave the hostile land routes of Aspiria and the rest of the Great Parch. To aid in this endeavor are the Cogforts built by the Ironweld Arsenal, these walking fortresses can transport goods and traders in relative safety. This has allowed a small amount of trade to flow between Brightspear and Lumnos to the south-east. Though the warbands that reside in the frontiers between the cities have taken notice of such convoys.[3a]

The city's economy revolves around Aqua Ghyranis, a magical water from the Realm of Life that has become the premier currency of many of the Cities of Sigmar in the Great Parch and beyond. Other valuable and useful trade commodities such as Shyish black-salt and Bataari firesilk a place in the markets of the city.[3a][3b]

In addition to the Kharadron and Lumnos, Brightspear also trades with the Floating Market of Bataar, some of the nomadic tribes who reside beyond the city, and even the corsairs of Defiance Cove.[3a]

High walls separate the city from the wasteland surrounding it, manned by the Ironweld Arsenal, and its warmachines, these fortifications form the main, but not only, line of defence against Brightspear's foes. In times of war, Brightspear can call on a diverse host of warriors. From the Stormcast Eternals of the Celestial Warbringers, over the mages of the Collegiate Arcane, to the aelven cultists of the Daughters of Khaine and the mercenary Fyreslayers. In times of need, the merchantile Kharadron Overlords even lend their sky-ships to aid in the city's defence.[3a]

The upper city and central spire of Brightspear

The city is divided into three districts, the highest of which is the Upper City, or Upper Tier. This tier of the city is built atop a rotating disc, made to follow the movements of Hysh and Ulgu. It is built around the Spear of Heaven, the towering lighthouse at the center of the city.[3a][3b]

The Lower City, or Lower Tier is located below the spinning disc that is the Upper City and is much of it is cast in perpetual shadow, and those residing within it are forever subjected to the grinding noises of the tier above them.[3a]

A district in the New City

The New City is the ever-expanding outer districts of Brightspear. Here new buildings are made from the rubble and remains of the Agloraxi ruins and those of the Tzeentchian cults that ruled before the coming of the Celestial Warbringers. The Agloraxi were talented city builder, and the remains of their sleek towers, a spider-like web of passageways and bridges can still be seen to this day, as the planners of Brightspear prefered to cleanse and re-use what they had, instead of burning it all to the ground. So the modern New City is a mix of new and old, coming together according to the plans of the great architect Valius Maliti.[1a][3a][3b] The new city is the fastest growing district of Brightspear, Azyrite settlers and reclaimed Aqshians arriving almost daily. And so the city continues to grow in rings, each encircling the last.[3a]

The Agloraxi Realmgate in the Undercity

Brightspear's unofficial fourth district, the Undercity is a massive, ever-changing labyrinth of hallways and vaults deep inside the old Agloraxi Citadel. A number of secret, hidden entranceses are hidden all over the city, allowing adventurers and scavengers entry into its depths.[3a]