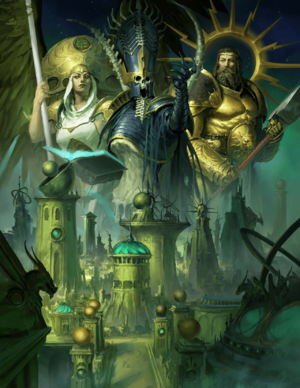 Alarielle, Nagash, and Sigmar, three of the original members of the Pantheon

The Pantheon of Order, sometimes referred to as the Pantheon or the Great Alliance, was the name given to the collection of gods, demi-gods and zodiacal beasts that Sigmar gathered to protect the Mortal Realms.[1][4] When they were united by common cause in the Age of Myth, the Mortal Realms prospered under their guidance and the wonders they achieved in those bygone days have never truly been replicated. [7a]

Sigmar had travelled the realms for many years, seeking allies of power to protect the mortal realms from the forces of Chaos and help build a new utopia. He first gathered them in his own Realm of Azyr, levelling the top of Mount Celestian to provide a setting for the first Grand Council.[1]

At this council, eight protectors of the Realms were appointed and for a time all was well. Nagash imposed order on the dead and his deadwalkers were prolific builders, Grungni taught mankind the metalcraft and under their benevolent rule, trade and civilisation flourished. Gorkamorka was given the task of clearing the wild countries as a monster hunter and set to the task with gusto and joy. The few incursions by Chaos in this period are repulsed by the united forces of the Pantheon. [1]

Yet it would not last, for each of the members had their priorities or ambitions, Alarielle grew tired of the bickering and her visits grew evermore infrequent whilst Gorkamorka threw off the tedious restrictions of the other members of the pantheon and began a great destructive Waaagh! across the entirety Mortal Realms. The alliance was treated as peripheral by Tyrion and actively subverted by Malerion.[1] Morathi abandoned her former allies following failed attempts to manipulate them but also bitterly parted with Malerion.[3]

Slowly the alliance fell apart and by the time Chaos erupted into reality to attack the Allpoints, it was little more than a name. It truly ended when Sigmar hunted down Nagash after what seems to be a betrayal during a war that would later be known as the War of Heaven and the Underworlds.[1]

Sigmar's pantheon began to fracture after Archaon captured the Allpoints, his fellow divine deities returning to their realms, more concerned about the survival of their people and the realmgate between them and the forces of chaos. Archaon's spies and agents made sure to break communications between the gods allowing for Archaon to make easy prey of the mortals. Their division in both spirit and purpose allowed Archaon and Chaos to conquer the realms, making them ever more frustrated.[2]

By the Era of the Beast the fractures between the Pantheon of Order show signs of finally healing, with Grungni returning from a long self-imposed exile and Alarielle choosing to cast off her centuries-old isolationism. The return of these two august deities fills the halls of the Eternal City with hope, in spite of the many evils plaguing the Mortal Realms, that civilization can once more be restored.[12a]