From Age of Sigmar - Lexicanum
(Redirected from Free Cities)
Jump to: navigation, search

The Cities of Sigmar also known as the Free Cities were cities built by the forces of Order after the Realmgate Wars. Most of these cities are built around Realmgates, many of which have a Stormkeep. These Stormkeeps will most often be garrisoned by the same Stormhosts that conquered the lands upon which the cities were built.[1a][10a][17b][47a]

Founding of the Free Cities

Every Free City begins at the behest of God-King Sigmar himself. In his grand war efforts to drive back the forces of Chaos, Sigmar works tirelessly to determine what resources and strategic locations will most benefit his expanding empire. When an ideal location is selected, Sigmar will send forces from his Stormhosts to lay claim to these locations, as they are rarely unoccupied. Typically such cities are founded to lay claim to Realmgates, though the forces of Azyr seeks to claim any resources that can benefit Sigmatr's empire and crusades.[37a]

The first of the Cities of Sigmar would have their groundwork lain during the Realmgate Wars, when the Stormhosts of the Sigmar valiantly fought to wrest control of the Gates of Azyr from the lingering legions of Death, the vast war hordes of the Orruks, and the manifold forces of Chaos. Around the claimed Gates of Azyr, and many other Realmgates besides, the Stormcast Eternals built their mighty Stormkeeps, these great bastions allowed the Free Peoples of Azyr to follow without fear of the horrors of the Mortal Realms.[10a]

These early colonists erected settlements around the Stormkeeps, build new defences around them, and work the fields. As the years wear on these frontier settlements around reclaimed Realmgates grow into some of the most magnificent and important metropolises scattered across the Mortal Realms. First among these great cities are the Seeds of Life known as Living City, The Phoenicium, and Greywater Fastness built in the [[Realm of Ghyran. But it would be Hammerhal that became the grandest of the Cities of Sigmar. Hammerhal, also known as the Twin-Tailed City, is constructed around the Stormrift Realmgate, it is a sprawling city that stretches across both Capilaria in Aqshy and Verdia in Ghyran.[10a]

But these great cities were just the first among many. The Stormhosts continue to liberate Realmgates and constructing their citadels around them. These Stormkeeps are as varied and diverse as the Stormhosts themselves. Soon after mortals will arrive and begin the arduous work of making the plans made by the greatest architects and engineers of Azyr a reality.[10a]

It is the Lord-Ordinators and Lord-Castellants of the Stormhosts who work tirelessly to identify ancient ley-lines and fonts of magical energy upon which a city's Stormkeep will be laid. In some cases, depending on the size and importance of a city, additional Stormkeeps will be constructed to ensure the city is well-defended. The grand city of Hammerhal has no less than six Stormkeeps.[17b]

Once plans are determined for the structure of the Stormkeep, the Lord-Ordinators and Lord-Castellants get to work implementing them. Working alongside them are human masons, artisans, and work gangs as well as Dispossessed labour-clans and even small groups of aelves. With the inventiveness of the Duardin, the adaptability of the Humans, and mystic mastery of the Aelfs at their side the Stormcast can raise their awe-inspiring fortresses.[15b]

After the Stormkeep is complete, engineers of the Ironweld Arsenal and regiments of the Freeguild will arrive to erect temporary defences, such as earthen emplacements and wooden palisades, around the Stormkeep. Months will be spent testing these defences and building upon them where needed.[10a] In addition, Freeguild bastions will be constructed at key, strategic points; each of these imposing citadels capable of housing thousands of soldiers.[17b]

Once these defences are secure members of the Devoted of Sigmar begin their arduous task of cleansing the area upon which the great settlement will be built of the foul taint of Chaos and undeath. Sigmarite priests will pray to the God-King as great lines of Flagellant will strike themselves with barbed flails, the blood of these faithful will seep into the earth and burn away the taint within it. Agents of the Collegiate Arcane and Sacrosanct Chambers will then work to purify any lingering traces of taint.[10a]

Once the lands have been sanctified and purified, the next task is clearance. Trees are felled to make room for tents and barrack-halls, which will serve as domains to the early colonists, dams are built, irrigation systems are implemented, and the ground is made ready to be turned into farmland.[10a]

Once the land has been cleared and sanctified, the labour clans of the Duardin, the Dispossessed and Ironweld, build the roots of the city. These foundations often take the shape of a twelve-pointed star in honour of Sigmar. Starwater, blessed metals, and realmstone will often be used in the construction of the outermost walls of the city, as an added protection against daemonic and ethereal incursions.[10a]

In the months that follow the city will begin to take shape. Walls will rise in concentric circles, with the Stormkeep as the central-most defence. Next, the citizens of the city will build the first streets and thoroughfares, with statues of great heroes lining them. Soon after the first major wave of settlers will arrive, most of whom will be Azyrites but there are often many Reclaimed, the untainted natives of the regions around the new city, as well. Once they are settled in, the sounds of industry will earnestly begin to echo through the streets.[10a]

Eventually, the population will outgrow the plans for the city and inevitably more land is cleared and sanctified, new walls are built and streets are extended. Oftentimes the cities may grow faster than resources can be developed and slums will spring up beyond the outer walls of the city. These slums may be beyond the protection of the walls, but many local magnates and criminal enterprises will work to build crude walls and palisades around them.[10a]

This entire process can take decades, or far longer, and generations of settlers and citizens will be dedicated to building their city. But the result is a settlement that can claim to be among the greatest in Sigmar's burgeoning empire.[10a] Such cities become a haven for the many varied cultures and races of the Free Peoples, who live and work side by side.[17b]

Each Free City is drastically different and shaped by its history and the lands around it. The nature of the Stormhost that first founded their city, the factions and cultures that followed in their wake, the arcane and mundane industries that the surrounding land can support, the dangers that surround these newly built bastions of Order, all these things and more will shape a free city, it's people, cultures, and even it's policies.[37a]

Expanding Beyond the Walls

The Free Cities of Sigmar's empire are not merely solitary polises, whose people cower for safety behind the imposing walls and Stormkeeps constructed to protect them. Rather they are the centre of, often extensive, civilizations. As a free city swells in size and population, many townships, mines, watchtowers and other signs of civilization will spring up around them.[10a][47a][47b]

Border Forts will also spring up around the territories controlled by the free cities, many of them garrisoned by Freeguild soldiery.[47a][48a]

Long ago the city of Azyrheim was ruled over by a senate that represented the greatest factions of the city, but during the Age of Chaos it was infiltrated by agents of the Dark Gods, eventually a disastrous and bloody civil war broke out across the city. In the aftermath of this war, the senate was dissolved and its membership purged. The God-King himself summoned two-hundred forty-four of the city's leaders, the God-King bestowed upon each of them a title and command, these mortals would be the first Grand Conclave, the Lords of the Heavenhall. This Grand Conclave rules Azyrheim to this day, and the governing bodies of every Free City is modelled after it. Though the number of representatives varies according to any given city's size.[17c]

Free Cities Whose Locations Are Unknown 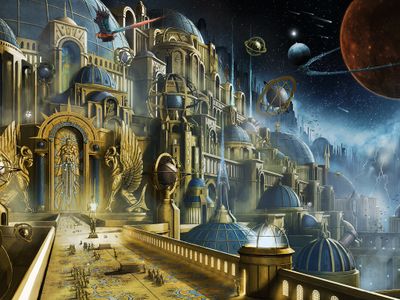 These are the great cities of the Realm of Heavens. They are not considered Cities of Sigmar in and of themselves, but it is from these cities that the first Azyrite settlers and crusading armies set forth to aid in retaking the Mortal Realms. These Azyrite cities share many similarities to their offshoots. 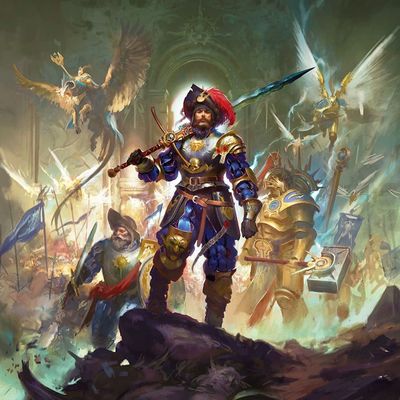 Defenders of the Cities of Sigmar

The following are those organizations and factions that live and operate within the Free Cities of the God-King's growing empire:

Conflicts often erupt between the groups and subfactions that represent the many Free Peoples of the Cities of Sigmar, though these conflicts rarely descend into bloodshed. Instead, such conflicts play out in the Conclaves of the cities. Bribery, blackmail, filibustering, and politicking often plagues even the most stable Conclave's proceedings.[37a] Prejudice is also common among the Free Cities, in all of its varied forms.[10b]

In the cities found on the Great Parch, a citizen will rarely face prejudice based on their species or gender but rather based on their station within a city's hierarchy or due to where what Realm they originate from. The politics of these cities will often exacerbate existing prejudices, often in ways, native Aqshians do not fully comprehend.[10b]

The Free Cities of Sigmar are isolated beacons of civilizations in Realms that have largely fallen to the wilderness or the dark deprivations of Chaos and Death. To step outside the walls of a Free City is to court the dangers that lie without, though myriad horrors can be found within.[10a]

Beyond the walls of the Free Cities are vast wildernesses full of predatory Living Spells, monstrous beasts such as Maw-Krushas, and Chaos-tainted entities such as Sphiranxes and Jabberslythes. The Beasts of Chaos also lay claim to many of the wilds beyond the walls of the stalwart cities of the God-King and these self-same imposing walls often attract the attention of ravenous Ogors, brutal Gargants, and rampaging Orruks.[10a]

Mortal servants of the Ruinous Powers are also attracted to these grand bastions of Order, eager to bring them to ruin in the names of their Dark Gods. These forces of Chaos range from the rampaging hordes the of Bloodbound and Rotbringers to the duplicitous cults of Arcanites and Sybarites hidden within the populations of the Free Cities. The verminous children of the Great Horned Rat have also set their sights on the Free Cities. Their mad machinations can undermine even the greatest among Order's beacons of hope. For those who survive the fall of a city to these dark forces, slavery and servitude to the Dark Powers await them.[10a]

So too do the followers of the Undying King threaten the sanctity of the Free Cities, ever more so since the Necroquake warped the Mortal Realms. Vast armies of Nighthaunt, Deathrattle, and Deadwalkers stalk the lands, preying on the living.[10a]