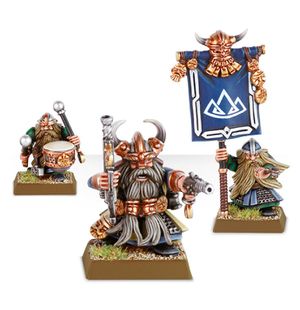 From left to right, miniatures of a Drummer, a Veteran and a Standard Bearer.

Thunderers are Dispossessed Duardin that are determined and set in their ways, granting them with a physical and mental durability that makes them steadfast fighters. They attack by shooting their handgun, firing precise volleys of gunfire at the heart of their enemies. They are led by Veterans and supported by Standard Bearer and Drummers.[1][2]

Thunderers are armed with Duardin Handguns, which they can use to bludgeon their foes in close combat, and Duardin Bucklers. Those units equipped with bucklers can form a shieldwall. Veterans often carry a brace of Duardin Pistols. Standard Bearer carry Runic Icons, which protects units from spellcasting, or a Clan Banner, which increases morale and diminishes the effects of the horrors of war.[1][2]