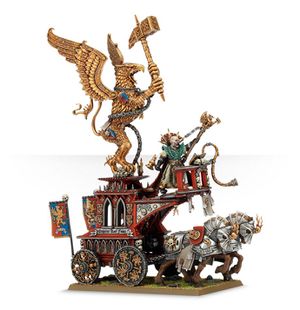 A War Altar of Sigmar miniature.

War Altars of Sigmar are battle altars pulled by Warhorses, and used by the Devoted of Sigmar. The altar itself is ridden by a Arch Lector, who stands in a platform at its fore with a statue of a Golden Griffon imbued with holy magic, and a mounted Devotional Horn.[1a]

The Golden Griffon statue can cast a holy light, called the Light of Banishment, burning and searing foes touched by it. This light is anathema to the followers of the Dark Gods, not only causing more damage to them, but also doing further damage to Daemons who cannot abide by its touch.[1a]

The Devotional Horn heralds the doom of their foes. It can be blown once per battle that reduces the bravery of foes close to it. The presence of a War Altar encourages nearby Devoted to ignore the horrors of war. The Altar also provides nearby Devoted with Sigmar's Shield, saving them from being slain by a miracle.[1a]

The Arch Lectors are armed with double-handed Sigmarite Greathammer or a Warhammer paired with a Staff of Sigmar, which is both a weapon and a badge of office. This senior Warrior Priest can try to unbind two spell at the same time. They can also pray for three Battle Prayers: Soulfire, Righteous Fury and Holy Fervour.[1a]