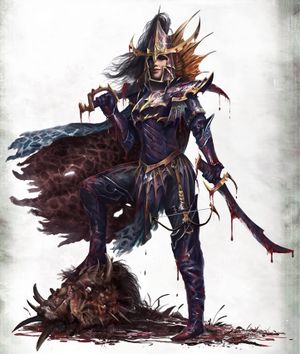 Black Ark Corsairs are veteran warriors and footsoldiers of the Scourge Privateers. Skilled in fighting on land as raiders or on the high seas, the majority of corsairs crew and fight from Scourge wolfships. They are cruel-hearted and avaricious, having spent their whole lives plundering lands and plying their bloody trade across the sea, seeking slaughter and loot.[1a][2][3]

They are led by a Reaver, supported by Hornblowers or Standard bearers.[3a][3b]

Corsairs are armed with Vicious Blades and often Repeater Handbows or a Wicked Cutlass.[3a][3b]

They are clad in Sea Dragon cloaks that grant them impressive protection against missile fire and can also be used in melee, allowing them to deflect enemy blows before the corsair strikes back with a deadly riposte. [1a]