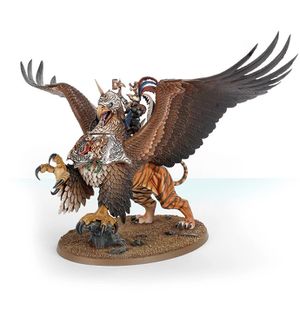 A miniature of a Freeguild General riding on a Griffon.

Freeguild Generals are commanders that lead the regiments of the Freeguilds into battle. Each is a veteran of countless battle and a master of strategy and tactics that have studied in one of the free cities' famous martial colleges. In addition they are also master duellists who can cross blades with the enemy as easily as they can issue orders.[1a][2a]

Some are granted the honour of riding griffons from Azyrite plains into battle[1a][2b].

Armed with claws like scimitars and a beak that can peel iron, Griffons are loyal and deadly companions. Upon his mount a Freeguild General can analyse the battlefield while soaring in the sky and when a flank wavers the Griffon dives like a comet slashing dozens of foes in a blur while the General drives his troops forward with war cries while the Griffon's piercing bloodroar shatters the enemy's resolve.[1a][2b]

Most Generals wield Zweihanders that can cleanly decapitate an enemy with a single swing, while others like those riding on Griffons or Warhorses can wield a magical Sigmarite Runesword or Sigmarite Greathammer or a Freeguild Lance. They may also wield a Freeguild Shield to deflect blows from the enemy but some prefer to forgo the shield to either keep one hand free to steer their mount better or choose to wield a pistol to shoot enemies from afar. Occasionally some generals will carry a Stately War Banner into battle.[2a][2b][2c][2d]