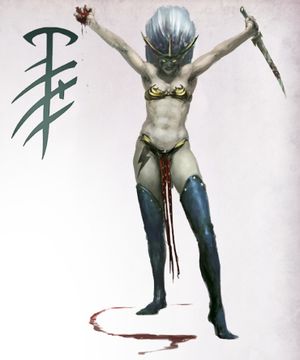 A Witch Aelf of the Khailebron.

Khailebron is a sect of the Daughters of Khaine famed for their skills at stealth and assassination. [1a]

Morathi often uses them as messengers (often lethal) but they also have a public persona as blade dancers and exquisitely effective pit fighters. [1a]

A nomadic sect who have been taught special magic that enable them to operate under the cover of arcane mists, and in keeping with their stealth speciality they are often tattooed to help break up their outline. Amongst the war covens are many Melusai, shrouded with illusions when within the cities of order.[1b]

Following the opening of many of the hidden Stormvaults, Morathi herself led a force to claim the Face of Khaine, an ancient artefact forged from Ur-Gold. They descended into the perilious Caverns of Abyssal Silence, fighting both Troggoths and Fyreslayers of the Aqshygahr Lodge before finally gaining their prize.[2a]