This is a legacy article for the fallen Free City of Anvilgard. You may be looking for Har Kuron, the current iteration of the settlement

Anvilgard, the City of Scales, was a heavily fortified port city that borders the sweltering jungle of the Charrwind Coast in the Realm of Aqshy also known as the Crucible of Life. The city was located in a strategic location which watch over both the Golvarian Passage and a highly contested and valuable stretch of the ocean filled with precious resources and long-lost treasures.[2][3a]

The nearby volcanoes are constantly erupting and drowning areas of the jungle in molten lava, which infuses the flora with Aqshyian magic causing the flora to grow back with unnatural aggressiveness. In order to stop the growth from overrunning the city noxious defoliants, developed by Ironweld alchemists, are released into the air by great dragonheaded guard towers causing plant life to wither and die. Although harmless to the city's inhabitants, it shrouds the streets in a semi-permanent grey murk.[6b]

Anvilgard was invaded by Daughters of Khaine led by the newly ascended Morathi-Khaine with the help of aelves of the Blackscale Coil during the Fall of Anvilgard, despite resistance from Stormcast Eternals, Freeguilds, Dispossessed and loyalist Aelves. The city was annexed into her new empire and was renamed Har Kuron.[10]

A city first founded under the direction of the Anvils of the Heldenhammer, growing from the fortified towns that were built after the Realmgate Wars. Surrounding Anvilgard on all sides is a dense, sprawling jungle that is further encircled by a series of active volcanoes. Into this wilderness, the Order Draconis ride out to test themselves against the ferocious monsters that populate the area.[1][5b]

At the beginning of the Time of Tribulations, Anvilgard's Swifthawk Agents are tasked with locating Lord-Ordinator Varangenesis, the scouts are led by Gossamon of the Winged Helm who dies from poisoned wounds after a successful engagement with a much larger force of Slaaneshi cavalry.[4]

The sea-lanes of Anvilgard were plagued by orruk pirates from a floating shanty-port known as the Blista Bakk and the shadowy cabal of criminals known as the Blackscale Coil pressures Anvilgard's Grand Conclave into launching a naval invasion. Scourge wolfships surround Blista Bakk and rain fiery missiles on its rusty ramparts while Freeguild marines are unloaded from steam-galleons with reinforced prow-rams that smashed their way into its harbour. After the docks are cleared the Scourge Privateers unleash several Kharibdysses driven to a mindless rage and soon the Blista Bakk sinks into the Searing Sea.[6a]

Anvilgardian architecture is characterized by its many tall spires, and the heavy use of curved and hooked design elements, creating many shaded nooks and crevices. The buildings lining the city's many winding pathways are often built from black volcanic rock or dark ebony wood.[9a] As a result of its turbulent and violent history, Anvilgard is a well-defended frontier city. Almost every wall or building is heavily fortified. Thick stone walls, reinforced doors, and small embrasure like windows are characteristic for even civilian buildings. Tall watchtowers and gatehouses watching over the city streets are just as characteristic of Anvilgard as its many markets.[9a]

The city of scales has grown massively since its founding, from the Square of the First Rite at its centre, to the Searing Sea on one, and the jungle of the Crucible of Life to the other side. This growth has been channeled into the form of concentric circles. The inner circles, with the First Circle at the top, representing the top of the anvilgardian society, while the ones closer to the edge are the home of the city's poor.[9a]

The first circle is the founding part of Anvilgard and home to the city's higher echelons. Centred around the Square of the First Rite, most of the city's highest institutions can be found here.[9b] 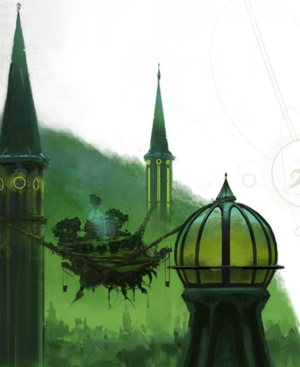 The Sylvaneth embassy of Spireroot above the roofs of Anvilgard

The poor neighborhoods around the outer edge of the city are also known as The Gullies. Small wooden huts are common there, with only a few stone buildings in between. The streets are littered with stripped carcasses of great beasts. Now only used as playgrounds by local children.[9b]

Anvilgard has a powerful navy with steam-galleons as well as wolfships of the Scourge Privateers. It has numerous Freeguild marine regiments such as the Rumrunners. [6b] On the landward side, Anvilgard is protected by its high walls and a number of Ironweld Arsenal watchtowers. Additionally, three Cogforts are patrolling the jungles surrounding Anvilgard. The largest and most prominent of the three is the ancient Old Firesnout.[9c]

The city is ruled by the Grand Conclave of Anvilgard. However a cabal of outcasts known as the Blackscale Coil manipulates the conclave using a combination of blackmail, threats and murder. This organisation is ruled by a shadow council of aelves including Fleetmasters of the Scourge Privateers, Sorceresses of the Darkling Covens and Beastmasters of the Order Serpentis and has agents of all races in every military and social stratum of the city.[6b]

The morose traditionalism of the Anvils of the Heldenhammer has been sown deep into the soul of the city. Anvilgardians are dour and hardy frontier folk, distrusting of others and beholden to superstition and ancient folklore. Despite the intractability of its populace, Anvilgard draws many visitors from faraway lands. However behind the noble exterior the city is rife with illicit trade and criminality.[3a][6b]

The Free City of Anvilgard owes much of its wealth from the hides and scales harvested from the monstrous creatures that reside in the Searing Sea.[11a] Monstrous creatures from the surrounding jungle, rare and exotic bones and other creature parts, as well as dark and mysterious artefacts can all be bought, for the right price.[9a]

Anvilgard is a center of trade. The city's harbors and markets bustle with activity, with merchant fleets, nomadic tribesmen and foreign traders all flocking to the markets to sell their products or to barter of trinkets and artefacts looted from the scattered ruins of the Searing Sea[3a]. While Aqua Ghyranis is an accepted currency in many cities in Aqshy, traders coming from more distant lands often prefer to barter off their exotic goods.[9a]

The primary tradegood in Anvilgard are foodstuffs. Shipments of grain brought in by Kharadron sky-vessels[7b], and mountains of fresh fish or beast flesh caught by sleek Aelven ships flood the markets of the city everyday. From here they get shipped of to less fertile cities like Lethis in Shyish[9a] But not all trade in Anvilgard happens in well-regulated and policed market squares. Anvilgard is also home to an extensive network of hidden auction houses and shadowy black markets.[9a]