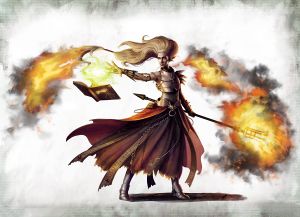 A Battlemage is a member of the Collegiate Arcane who seeks to master one of the lores of magic, having been trained in one of the Sky Towers of Azyrheim.[1a][2]

Most of the magic of the Collegiate Arcane, and thus that used by the Battlemages is derived from those archmages who had survived the Age of Chaos and fled to Azyrheim before the closure of the Realmgates to the Realm of Azyr. Sadly a great deal of arcane lore was therefore lost in those centuries and Battlemages will go to great lengths to recover a single frayed page from an ancient tome of magic. [2]

Battlemages, the wizards of the Collegiate spend a decade of their lives studying at each of the Towers of the Eight Winds and gains his or her powers through through both practice and study, using mystic foci and arcane phrasing and frequently requiring magical ingredients ensuring that they are often as gifted in creating wands and talismans as they are at hurling spells in battle.[2]

Unlike the aelven masters of the Eldritch Council, mages of the Collegiate cannot instinctively control their magic and must rely upon sorcerous foci and techno-arcane devices that often take the form of simple items such as enchanted staves, hourglasses, amulets and the like to channel their power. Through them they can summon arcs of scorching lightning and choking wisps of shadow to annihilate their foes or envelop their allies in shimmering shields of magical force, infuse them with the wild strength of Ghurish beasts. Wielders of magic are suffused with the energies of the realm in which they were born. While Battlemages are able to learn and use the lores of other realms they are more potent when using the spells from his home realm. [3a]

Battlemages have a few spells that are exclusively used by them: 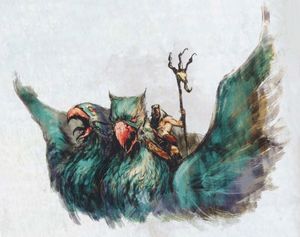 An Amber Battlemage riding a Griffon.

Amber Battlemages hailing from Ghur sometimes use their mystical connection to beasts to secure a war mount and there are tales of giant bat-winged frogs, solar bears, silt-serpents and other rare and ferocious beasts. The most common are the twin-headed Ghurish griffons who are an offshoot of the Azyrite breed but with greater aggression and strength. These Griffons are then mounted with an ornamental saddle and an elaborate heraldic device across their chest with skulls totems and other bestial items.[3a][4]

The Collegiate Arcane has several war machines attuned to a wind of magic that is crewed by Acolytes. They can also be crewed by Battlemages of the corresponding element.[1e][1f][1g][1h]

Of these the following are known:

Battlemages do not devote their time on physical forms of warfare which makes them appear weak in single combat. But in fact not only can a Battlemage shield themselves with enchantments, their Battlemage or Wizard Staves and blades are also powerful in arcane energy and a single blow can wreathe the target in flames or wither their flesh to dust.[1a][1b][3a]

Amber Battlemages mounted on Griffons defend themselves in melee with Beaststaves. They are often dressed in fur and adorned with primitive talismans.[1c][4]