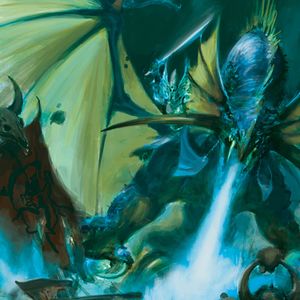 A Dragonlord riding a Dragon.

Dragonlords are the Aelven commanders of the Order Draconis armies, often found riding on the back of Dragons alongside Sigmar's Stormhosts. Their ability to strike down their foes with unmatched swiftness makes them incredibly dangerous. A Dragonlord can inspire their fellows to hit more often.[1] [2a]

Dragonlords use Dragon mounts that attack with their Fearsome Jaws, their claws and deadly torrents of Dragonfire.[1][2a]

Dragonlords wage war armed with Dragon Blades or Dragon Lances, paired with an Enchanted Shields, a Reaver Bows or an Aelven War Horns that can inspire his followers into greater heights of martial expertise.[2a]