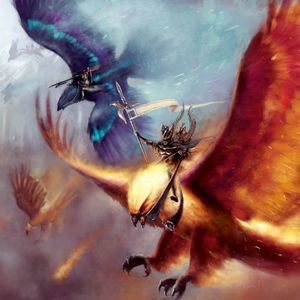 A Frostheart Phoenix and a Flamespyre Phoenix ridden by Anointed.

Having blessed by the Ur-Phoenix, motes of elemental magic sparkle about them and protect them from harm. This blessing is strong enough to allow them to march through the thickest storms of enemy magic without injury, unbind enemy spells and even dispel Endless Spells. Even incoming blows and magical bolts seem to avoid hitting them. Such mark also inspires greatness in their followers in the Phoenix Guard.[1a][1b][1c][1d][1e]

Some ride on the back of Flamespyre and Frostheart Phoenix, flying spawn of the Ur-Phoenix who attack with their elemental talons.[1b][1c][1d][1e]

They wield gleaming Great Phoenix Halberds that they sweep at their foes.[1a][1b][1c][1d][1e]