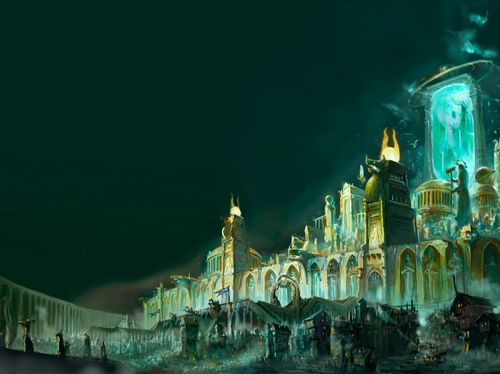 A Stormkeep inside a City of Sigmar.

Stormkeep are imposing citadels that protect captured Realmgates and the cities created around them during the Age of Sigmar.[1]

These fortresses are manned by Stormcast Eternals.[1]

Built around Realmgates, they are found in truly inhospitable places, however the engineers and architects loyal to Sigmar are as tenacious as they are inventive and by artifice, engineering or sheer force of will, the challenges presented by each Realmgate are overcome. Then the Stormkeep is fortified with battlements while the Realmgate itself must be reinforced with arcane wards and heavy gates to prevent invaders coming through to attack the keep from the inside. The first defenses built around a claimed Realmgate are simple keeps and curtain walls which are then reinforced with towering buttresses and cannon nests built along crenelated ramparts to the exacting specifications of the Ironweld Arsenal. Moats are dug, rivers rerouted, and reservoirs and rain-gathering sluice networks are established in those lands too dry to sustain a swiftly growing population. Concentric ring of fortifications are completed around the original site and soon the work on another ring begins. These growing cities are under constant attack and for them no defense is too much.[2a]

The Lord-Celestants of the Stormhosts commission vast statues of the heroes that liberated the Realmgate, some of which are enchanted to breathe lightning or drop enormous hammers against attackers. As the Stormkeeps grow they are expanded with archery batteries, spiral staircases, star-fort walls, cloud-piercing spires, gilded minarets, spytowers, overseer colonnades, balustrades, boulevards and promenades. Lord-Castellants fit the Stormkeeps with colossal orreries to delve deeper into the secrets of the stars.[2a]

Holy artefacts known as Celestine Writs are given to the leaders of the Stormhosts, granting Sigmar and his Stormhosts control over the Realmgates around which a Stormkeep will be built, as well as the lands surrounding it.[4a]

The main function of the Stormkeeps are to defend the realmgates and the Cities of Sigmar which grow around them. Within them Stormcast Eternals take up residence in a myriad of halls, temples and meditation vaults while their leaders look to the skies from scryer-arenas, observatoriums and cells open to the sky to read the celestial portents and even astral project their souls to divine the optimum deployment of troops and defences. In addition to their military functions, they also become centres of learning and study. Archives of lore are assembled from scholarly collections imported from Azyr and combined with soot-blackened tomes and cartographical texts recovered from the old cities burnt to the ground by the forces of Chaos which are further expanded with new texts penned by vast teams of scriptors and calligraphists committed to the parchment of the histories of the free cities. In the most civilized regions, texts and images are replicated via cog-wheeled printing presses, intaglio, etchings made with sulphur-vitriol, or simply the fine art of painstaking quillmanship. These archives have become so vast that the Stormcast Eternals are able to continue the fight against Chaos even when not in the field by studying histories and maps for local knowledge that could help tip the balance in the fight against the dark powers.[2a]

Together with the Lord-Arcanums and Knight-Incantors , the Lord-Ordinators have created vast crackling batteries of celestial power that form a metaphysical link between a Stormkeep and the underspires of the Sigmarabulum known as Star Bridges which speed the Stormcast Eternals back to Azyr when slain near a Stormkeep, ensuring swift and safe passage so they might be reforged quickly. This allows them to return in a matter of days and may even rejoin the same battle or siege that saw them slain. These cosmic links are maintained at full strength by the dissolution of souls, a resource provided by the Sacrosanct Chamber as they are experts at capturing errant spirits. In some cases Stormcast Eternals, who have committed acts they believe to be beyond redemption, willingly contribute their final energies to power the Star Bridges and are blasted to nothingness, their soul-stuff used to keep the Star Bridge bright. In return, their names are etched into the Annals Tempestus that line the walls of each Lord-Arcanum’s sanctum, their sins forgiven.[2a]