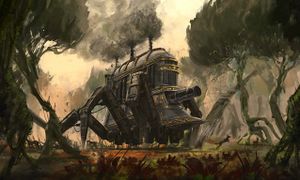 Cogforts are large war machines built by the Ironweld Arsenal that act as heavily armed mobile fortresses that defend the Cities of Sigmar and their territories.[3b]

Cogforts come in all shapes and sizes ranging from forts to small cities that travel on either wheels or piston-powered legs, making them appear like immense mechanical arachnids. They are often heavily armed with a wide variety of weapons such as cannons, fire-throwers and fire-steps for Freeguild soldiers to fire from. A central wall atop the fortress will often be constructed to surround a series of armoured towers. At the heart of these fortresses are the furnaces that power them, some Cogforts even use emberstone furnaces.[1a][3a][6b][7]

Cogforts were first deployed after the conclusion of the Realmgate Wars to aid in the reclamation of the Mortal Realms, construction of fortifications, and the destruction of the armies of Chaos.[1a][8a]

Some Cogforts have been captured by Kruleboyz, notably the Big Yellers Warclan, who have heavily modified them and now use them for their own destructive ends.[15a]

Cogforts are employed by many Dawnbringer Crusades in their reclamation efforts of the Mortal Realms, serving as mobile fortresses from which the Dawners can organize their forces and campaigns. Other mobile fortresses such as Sentry-Keeps and Border-Walkers are also used.[16a]

Cogforts patrol the regions outside the walls of the ever-expanding Cities of Sigmar protecting the city perimeter and defending vulnerable settlements outside of the main city. They also bring their firepower against enemies that stand in the way of the expansion of the city's territory.[3b] For many Free Cities, particularly Hammerhal Aqsha, Cogforts play a vital role in expanding and securing borders, allowing the influence of Sigmar's bastions to grow.[11]

The land routes of the Mortal Realms are fraught with dangers and chartering space on a Kharadron skyvessel is not always an option. As such many Cities of Sigmar use Cogforts to transport goods and travellers between each other, smaller settlements of Sigmar's empire, and allied cities of Order such as Lumnos. This has allowed trade to slowly flow through these many disparate bastions of civilization.[6a][7][12a]

These mobile fortresses are garrisoned by well over a hundred Human and Duardin soldiers, often pulled from the ranks of Freeguilds and the guilds of the Ironweld Arsenal.[1a][7] Occasionally Fyreslayer mercenaries and wizards will be employed alongside the rank-and-file forces.[5a][7]

Cogforts are a crowning achievement of the Ironweld Arsenal and are equipped with enough artillery and sorcerous ordnance to shatter a fortress or devastate an army.[1a] Such armaments include cannons, firethrowers, Helblaster Volley Guns, and massive muzzles that spew forth magma.[1a][6b][7]

Some, especially those from Hammerhal Aqsha, are equipped with a lightning-shield generator linked to the generator that creates an energy shield of crackling lightning that protects the cogfort from attacks and makes boarding the vehicle much harder. The shield could also be used to protect allies such as Duardin labour-clans that are constructing defences.[13a] 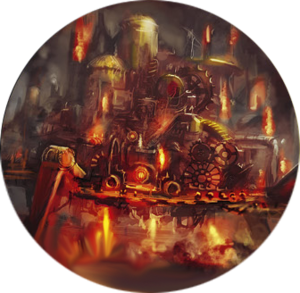