From Age of Sigmar - Lexicanum
(Redirected from Dawnbringer Crusades)
Jump to: navigation, search 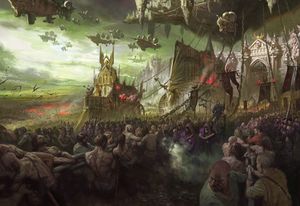 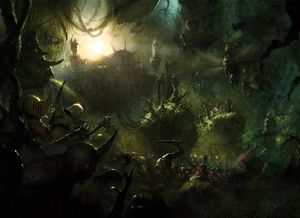 The Dawnbringer Crusades are vast caravans sent forth from the Cities of Sigmar. Such caravans seek to explore beyond the walls of existing Free Cities and establish new settlements.[1]

A Dawnbringer Crusade is prepared well in advance and in addition to the gathering of supplies, many pre-fabricated buildings are constructed in advance of the creation of the Crusade. These buildings are considered marvels of engineering and are placed, along with needed supplies, upon massive floating islands known as Metaliths. These metaliths are then towed by the Crusade during its travels to its ultimate destination.[3]

Some Crusades are scant more than a few hundred souls, but many are thousands strong and truly represent Sigmar's might. These expeditions are often accompanied by Stormcast Eternals, Daughters of Khaine, and Fyreslayers.[1][3]

The ultimate goal of a Dawnbringer Crusade is to establish a new settlement. Such settlements will often be built around ancient shrines, Realmgates, or Geomantic Nexuses.[3]

Not all Dawnbringer Crusades succeed, and indeed many fail, as they are beset by beasts, daemons, orruks, Chaos Warriors, and gheists that lurk in the hostile lands the Dawnbringers seek to settle in. And even those that do succeed face a constant struggle as threats seek to destroy their recently created towns, and many members of the Crusades will not live to see the fruits of their labour.[3]

When a town successfully reaches its destination construction of a new settlement can begin. An Aqualith, a purification device imported from Ghyran, is placed at its center and will aid in purifying the surroundings of corruption.[3]

Dawnbringer Crusades are military forces in their own right, with their forces bolstered by the presence of Stormcast Eternals, Daughters of Khaine, and Fyreslayers.[3]

The members of Dawnbringer Crusades are known as Dawnbringers or Dawners.[3]