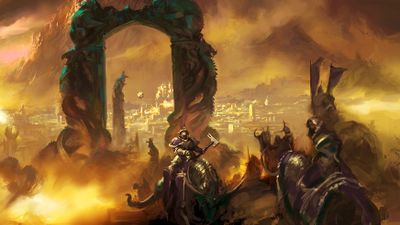 The Phoenicium is a City of Sigmar found at the foot of the Arborean Mountain in Ghyran and the one of the Seeds of Hope.[7a]

It is noted as being a beacon of culture in the Mortal Realms, filled with beautiful art, architecture, and amber statuary as well as places of learning where the aelves strive to recreate all that had been lost in ages past.[3]

During the Age of Myth the city of Aelfgrove[4b] was encased in amber and became an enigmatic ruin, haunted by strange entities and inhabited by bands of wanderers and brigands. The ruins were preserved for hundreds of years in amber from the Arborean Mountain after the lower slopes of the mountain were torn asunder during a battle and a tidal wave of sticky sap was released, engulfing the city and the helpless combatants before solidifying into a giant glacier of hardened amber. The ruins would stay this way during the Age of Chaos, untouched by either Nurgle or Alarielle if not for its discovery by the Anointed of the Phoenix Temple, after defeating a Rotbringer host at the Dreamloss Realmgate.[1][4a][5a]

The Phoenixes of the Phoenix Temple did an aerial dance that turned the amber into golden mist, freeing the city for the first time in centuries. The golden mist persists to the present day both cloaking its wondrous promenades and white marble towers in a warming haze and defending it from enemies who are transformed into amber statues if they stray too close and added to the gleaming ramparts. With the help of the Stormcast, the Sylvaneth and the Azyrite people, they resettled the nameless city and named it Phoenicium.[1][4a]

Much like the rest of the Cities of Sigmar it is governed by a Grand Conclave. The head of its Conclave is known as a Master Patriarch.[6]

This is the centre of the Phoenix Temple's power in the Mortal Realms and many worshippers of the Ur-Phoenix make their pilgrimage to the Phoenicium, the holy city of their deity. Aelves are the dominant culture in the Phoenicium, in terms of both population and seats in the Grand Conclave but they recognise a kinship with their fellow races and welcome both duardin and humans into the city, although only aelves may serve in the armies of the Phoenix Temple. For many aelves descending from the great civilisations lost during the Age of Chaos, the city is a testament to their former glory and they occupy themselves with art and enlightened study as their ancestors did in ages past symbolising the metaphorical rise of the Ur-Phoenix.[4a]

Rulers of the Phoenicium prefer to see their home city as a beacon of culture instead of a military stronghold but its standing armies are both ready and eager to defend its borders. When war calls Flamespyre and Frostheart Phoenixes descend from their roosts on the Arborean Mountain with mournful cries that boost the resolve of the city's defenders. In battle the precise swings of the elite Phoenix Guard combined with rains of magical gouts of ice and fire unleashed by phoenixes reduce the enemies of the city into piles of ash and shattered ice in their wake.[4a]