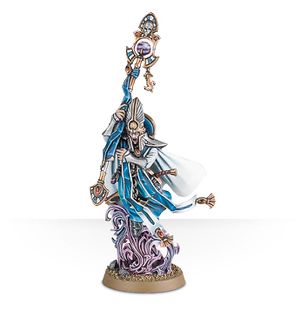 Archmages are the Aelven spellcasting masters of the Eldritch Council.[1][2]

Archmages derive their power from that of the elements, from the black ice of Shyish to the flickering soulfire of Aqshy, being known as masters of flame, frost and gale. They often lend their magical skills, being in the form of attacks or inviolate wards, to purge the curse of Chaos that hangs on the Mortal Realms. Faith and blood can consecrate the ground, but aelf magic is used to shatter chaos runes and unbind hellish spell-traps.[1][2]

An Archmage usually carries a mystical Seerstaff to channel his magical abilities or a Magestaff paired with an Arcane Tome, doubling their casting potential, or a Sorcerous Blade, to defend themselves. They also carry a Talisman of Arcane Power, like a tome of spells or a magical amulet, to help them dispel fell sorceries. [1][2][3a][3b]