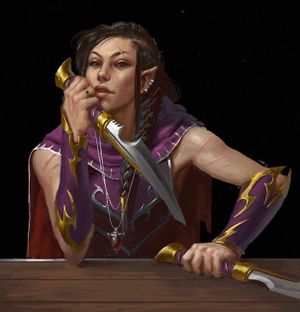 Maleneth Witchblade is a Shadowblade [3], an assassin trained in the Temples of Khaine who now works as a agent for the Order of Azyr [1] [2]

Black of hair and eye, she is invariable dressed in tight fighting leathers that cover most of her body and offer some protection against enemies skilled or lucky enough to hit her. Around her neck is hung a vial of blood, the soul of her former mistress bound to the ichor who often whispers into her mind. [1a]

Maleneth was born into a noble family - as a girl she would murder the row’s cats and kidnap the neighbours’ children, finding other people’s pain arresting. [3] She had expected to be married into another of her class but as she watched her four younger sisters dancing the Seventeen Blades she was dragged away that very night to become part of the sisterhood of the Daughters of Khaine. [1b]

However she did not the follow the path of the Witch Aelf but was instead trained as an Assassin. [2a].

After the events in which they were pivotal in saving Hammerhal from the forces of Chaos[2], Gotrek spent some time in Hammerhal Ghyra, getting very drunk and apparently immune to the various poisons that Maleneth secretly tried on him. Together with an ageing warrior-priest Alanaer and an equally ancient Freeguild ranger, Halik the pair found themselves looking for a missing child, apparently taken by the ghost of Hanberra. They located the child, disrupting a skaven plot and helped put the old ghost to rest, bringing the child back to his parents.[3]

Maleneth then accompanied Gotrek Gurnisson across the Mortal Realms, protecting the Master Rune that was now embedded in his flesh. [1a] They travelled across the Bone Desert, searching for the Slayer's lost axe and plagued by assassins all the way to the Eight Pillars. Finally Maleneth was poisoned [1d] and was only saved by the Arch-Chirurgeon Abul Draz at the Temple of the Lightning. [1e]

Following the Necroquake, Gotrek sought to confront Nagash, accompanied reluctantly by Maleneth and the damaged Stormcast Eternal Trachos. They briefly stay in the town of Klemp[3a] before it is engulfed by a Bonestorm and then a horde of Crypt Ghouls. They travel to the previously hidden Morbium, a Amethyst Princedom seeking a way to travel to Nagash, but they are caught up in the invasion of the kingdom by the Flesh-Eater Court of King Galan.[3b]

As they fight to protect themselves and the inhabitants, Gotrek discovers that the inhabitants of the princedom have echoes of his own long lost people. They defeat the Ghoul-king and his court, leading the survivors away towards the Stormkeep of Hammerskáld. Malaneth communicated with her superiors from the stormkeep, noting her own changing view on the slayer and his new mission to fix the Mortal Realms. [3]

In the audio drama Realmslayer, Maleneth is portrayed by Penelope Rawlins.[2]