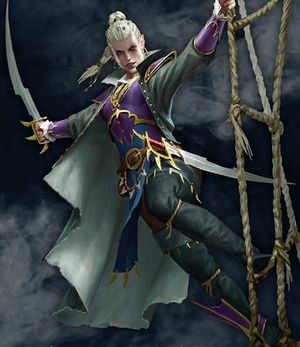 Arika Zenthe is a Aelf Fleetmaster and commander of the Scourge Privateers fleet based in Excelsis.[1]

The daughter of the Fleetmaster Zarkland Zenthe who she has tried to kill on a number of occasions.[2] She is also an associate of Hanniver Toll and her flagship is the Thrice Lucky.[1c]

Her look is both beautiful and deadly – she is tall and slender, projecting an aura of both strength and agility. Her white hair is sometimes cut short, spiked at the tips and she favours a long coat of leather, itself embellished with images of the Kraken, the spiked collar framing her face. [1a] Her weapons of choice are a jewelled cutlass and a tri-bladed main gauche. [1b]

She was born more than five hundred years ago on the Black Ark Eternity of Torment.[2a] Her mother and all but one of brothers were sacrificed to prolong the life of her father who had been cursed[2d] - she and her last brother Levrid attempted to escape but were captured and he was killed in turn to give her father another hundred years, although he begged him to take Arika instead. [2c]

In her long career as a corsair she has killed the God of Sharks and destroyed the Sepulchral Fleet in the Straight of Bal-ah-bek. [1a]

As the Age of Sigmar progressed she was considered the ruler of the harbour of Excelsis and from this base terrorised the Coast of Tusks. [1a]

She traded favours with the Witch Hunter Hanniver Toll and he was able to contact her in extremis with a Kraken’s Eye, a magical orb. [1a] and with this he contacted her to first release him from prison and then helped save the city of Excelsis from the Uprising of the Cult of the Fated Path.[1]

Hanniver enlisted her in his pursuit of Ortam Vermyre, spending nearly a year seeking him, testing her patience, before they almost caught him in the jungles of the Taloncoast. A subsequent dangerous sea voyage saw her flagship nearly destroyed and she, her crew and passengers briefly captured by the High Captains of the infamous port of Bilgeport. Finally the long pursuit ended in the lost city of Xoantica, where both Arika and Admiral Bengtsson fought together but were unable to gain any loot, both being injured in the conflict. Toll repaid her help with the location of her father. She quickly set out to nail his head to her prow.[3]

Arika reached her father not long after on the Eternity. Zarkand quickly lured her into a trap and revealed his desire to revive the old Scourge Privateer empire under his new Twilight Cabal.[2b] Beginning with the conquest of Izalend but first he needs the Everflame protection that surrounds Izalend disabled. To that end he tasks her with retrieving the Heart of Winter from Dreadwood Sylvaneth in Druichan Forest outside Izalend.[2b] She accomplishes this but passes the artefact to her allies who feed it to the Ghorvorasc, on which the Eternity sits, fatally poisoning it and destroying the Black Ark in the process.[2e] Meanwhile she attempted to finish Zarkand, but he escapes with her traitorous first mate Oscus.[2f]