From Age of Sigmar - Lexicanum
(Redirected from Realm of Fire)
Jump to: navigation, search 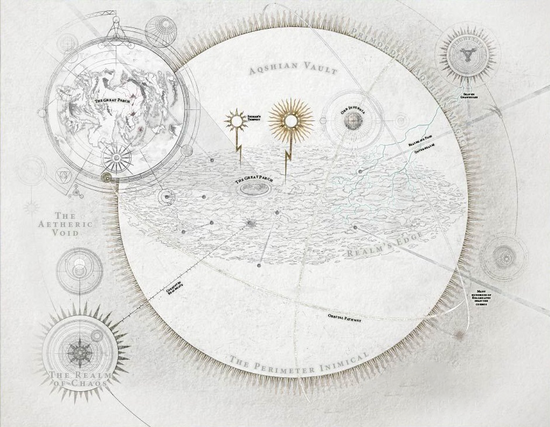 The Realm of Aqshy, also known as the Realm of Fire or the Bright Realm, is one of the eight Mortal Realms. Aqshy contains lands of passions untold and volatile landscapes, its people have a fierce outlook on life with invective and harsh cultures. A realm of blazing heat and sulfurous fumes.[1a][3][20b]

Aqshy has been under the rule of Chaos for a long time, especially Khorne's.[3] 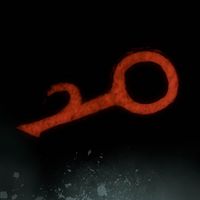 The Key of Secrets

The Rune that is used to represent the Realm of Aqshy is the Key of Secrets, it is often to be found on items carried by inhabitants of the realm or as lucky charms - many magical items and artefacts are also keys or have their power unlocked by them. [22]

A reality of burning passions untold, The realm of Aqshy is a place of emotion and sensation. The embodiment of literal and non-literal fire, aggression, ambition, passion and energy. This is reflected in the very lands themselves, the earth rumbles with barely contained energy and volcano ranges are more common in this realm then any other, spewing volcanic ash across the lands, while rivers of lava pool into great lakes of magma. Jungles are infused with the realm's endless energy, growing so aggressively that overnight entire segments of barren land will be dominated with dense vegetation. In other places, vast boreal forests will be hammered by violent ice storms of incredible intensity.[20b] [20a] [22]

Aqshy is composed of dozens of continents that hang suspended in the Aqshyan Realmsphere. Before the Age of Chaos these continents were joined by bodies of water; afterwards the energies of chaos had splintered many of them. It is mostly impossible to reach these islands of reality without access to a Realmgate. There are no maps that detail them all.[20b]

Aggression is born and carried on hot, gusting winds.[20b]

The peoples of Aqshy are aggressive, competitive, passionate and courageous. Life is lived in the moment, love or lust are aggressively pursued and emotions run hot. Home to many tribal peoples, trials of combat or strength are well loved. But, due to the influence of the God-King Sigmar, as well as to the competitive and ambitious nature of the realm's people, great and magnificent civilizations arose across the lands during the Age of Myth, and once again rise in the Age of Sigmar.[20b] [20a] [22]

Fashion in the realm is represented with the colors often associated with Aqshy, red and yellow. But there are many colors, from white that represents white-hot flames, to pink another color associated with passion.[20b] [20a] [22]

The Realm has three moons:[26ba] 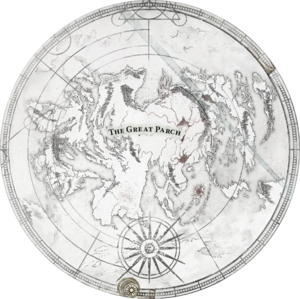 Overview of the Great Parch

The Great Parch is a sprawling continent inhabited by bombastic and reckless people that love to fight, feast and love.[20a]

It is here, in the Brimstone Peninsula, that the first battle of the Age of Sigmar started and here that many of the Cities of Sigmar, like Hammerhal Aqsha, Tempest's Eye, Hallowheart and Anvilgard were built after the Realmgate Wars.[20a][3][1b] The city of the Brightspear, is the newest City of Sigmar built in this region.[26a]

Once the heartland of Aqshy, where the Twelve Tribes of Bellicos had formed a great city-state. The Brimfire Gate is located in this region, protected by a series of fortresses collectively called an All-Gate.[9]

The inhabitants of Aqshy are fiery and volatile, and no matter how much they try to hide it, Aqshyian always emotion simmers beneath. Their lives are said to burn bright and short.[20a]

The tribes of Aqshy believe in the philosophy of burning brightly and well, that life should be lived hard, violently and fast. This is exemplified best in the dangerous coming-of-age rituals, like cliff diving and sulphur running, that see many young killed and the survivors hardened into better warriors. The young see those that reach old age with pity and scorn, a view not shared with the more mature which believe they should be celebrated for surviving and being tempered by the fires of conflict. This also applies to who these tribes chose as leaders, with gnarled and scarred warriors being preferred.[20b]

Many of the civilisations of the Great Parch have been laid low during the Age of Chaos, but not able to completely extinguish them. The return of Sigmar, through his Stormcast has reignited the hopes and dreams of its inhabitants.[20b]

The Realmsphere Magic and spells associated with the realm of Aqshy are known as Bright Spells.[26d][26e]