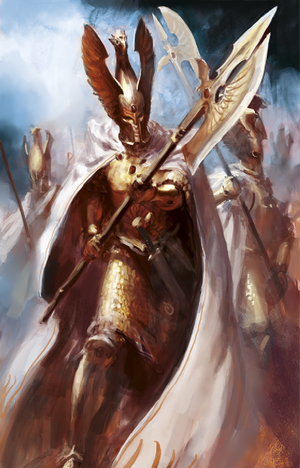 The Phoenix Guard are a revenant bands of Aelven warrior-champions of the Phoenix Temple that fights to preserve the flame of the Ur-Phoenix and banish the corruption of Chaos.[1][2]

They are grim and resolute, literally throbbing with an aura of dread and can be found fighting where its at its most fierce. The Phoenix Guard march across the most hellish battlefields in the realms and fight in total silence while incoming blows and bolts of sorcery unnaturally miss them. No longer held back by mortal fears they accept death and injury with stoic resolve.[1][2a][3]

Units are led by Keepers of the Flame and usually supported by Drummers and Standard Bearers.[1][2a][3]

Those Aelves that join the Phoenix Guard have sacrificed their mind and body in battle to the point they are broken beyond the capacity for speech. Their bodies are carried by robed priests to the sacred pyres, raised as shrines to the Ur-Phoenix where in a ceremony that lasts days, a dying Phoenix wraps its wings around the dying warrior and engulfed by elemental magic and are reborn as one. In return the Aelf must join the ranks of the Phoenix Guard.[1]