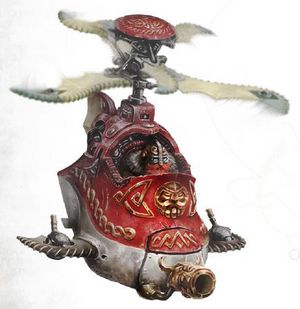 Gyrocopters are Duardin fighter craft created by the Ironweld Arsenal to main the air superiority over skies of the Cities of Sigmar.[1][3][4a]

The main role of Gyrocopters is to act as support craft but they are also used more proactively such as launching air raids against enemy fortresses that are inaccessible by other means. [4a]

Gyrocopters have bomb ranks containing Guild Bombs, volatile black-powder explosives and a front-facing gun which typical consist of either Brimstone Guns which are flame weapons, or Steam Guns, which spray their foes with flesh-melting scalding vapour. In desperate times it's Rotor Blades can be used as a weapon in melee.[1][2][3][4a]