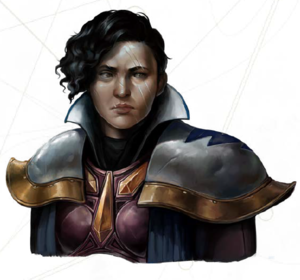 Sometime after the conquest, many of the Celestial Warbringers were reassigned, leaving Salonia Gravewing as the commanding officer of the remaining garrison of Stormcast, residing in the Stormkeep known as the Portentarium.

During the catastrophic events of the Necroquake, restless undead devastated population and city alike. Many members of the city's Conclave died including the Conclave's leader,the Chancellor. Salonia Gravewing declared martial law, until a replacement can be found for the dead Chancellor and is currently governing the city as Sigmar's representative.[1b]

While some of Gravewing's critics in the Conclave lament the continuous state of martial law, she has so far failed to appoint a new Chancellor as civilian leader of the city.[1b]