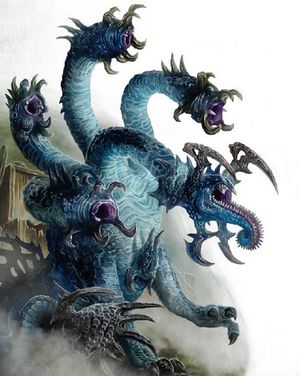 Kharibdysses are brutish and slow-witted abominations that live deep under seas and oceans of the Mortal Realms. It is known that Idoneth Deepkin hunted these beasts. They are also used for war by the Scourge Privateers.[1][2]

The creature has four small heads, each with their own features, and one larger, spike-covered head with an extended lower jaw. They have a chest plate and spines on their back and legs.[2]

When they smell the blood of their prey they release a spine-chilling roar. Consuming corpses causes a Kharibdyss to regenerate from their wounds.[4]

Dragged up from the deep seas, they are driven into battle by grim handlers. [3a] In order to rouse the beast into a rage, its crew, often badly scarred themselves, lash whips and use their goads but they must be careful in case the Kharibdyss turns upon its tormentors.[4b]

Whilst the Kharibdyss lashes about with fanged tentacles, clawed limbs and spiked tail, its Beastmaster Handlers use their Cruel Goads and Whips against any enemy, to keep the ferocious beast in check and to stoke the beast into a terrible rage.[3b][4a]