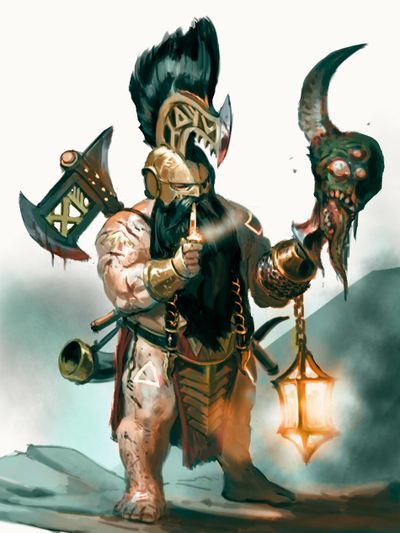 A fyreslayer from the lodge 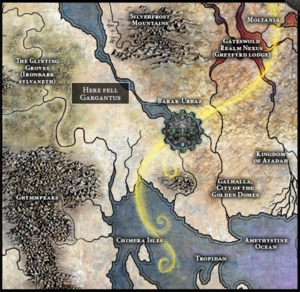 Map of Gateswold in Chamon.

The Greyfyrd Lodge are a ruthless and successful fyreslayer lodge mercenaries and warriors foremost. They have forgone mining and none but the Zharrgrim still work the forges. Instead their fyrds campaign constantly across the Mortal Realms, and their warriors are in high demand as mercenaries. The Realmgates of their primary magmahold - the Gatewold - in Chamon serve to facilitate this constant travel, and give the Greyfyrd access to locations across the Realms.[1a][1b]

The Greyfyrd have built a reputation as deadly mercenaries and peerless warriors with no qualms, no stipulations, and no questions asked but that their price be met. A fact that has further elevated their reputation and seen them serve for causes just and unjust alike. The price they ask is high but it is warranted by their successes.[1b] Amongst the fyreslayers however, their reputation is more troubled, and others are quick to point out how many of the scions of the Greygrend and the Greyfyrd have been overcome by the Glimmerlust. Perhaps this is the reason the Greyfyrd choose never to speak of their dark heritage.[1b][1c]

The Greyfyrd's ancestor [lodge]], the Greygrend were destroyed in mysterious circumstances and the survivors would found the Greyfyrd.[1a]

As the Realmgate Wars neared their close, and the All-Gates came under attack, the Greyfyrd lodge under the leadership of Runefather Hursgar-Grimnir, were hired by the Stormcast Eternals to take the Mercurial Gate. The Runesmiters tunnelled a force up into the centre of the fortress and were able to overcome the interior defences. However, they were eventually defeated in the ensuing battle when Archaon and the Varanguard arrived through the gate from the Varanspire.[3a]

Following the Necroquake, the city of Lethis in the Realm of Shyish was attacked by armies of Nagash and the lodge contributed forces to its defence at first, but in a response to unpaid debts by the city they opened the Onyx Gate of the city. So allowing the Nighthaunt processions of the Mortarch of Grief to enter.[2a]