Alarielle, Queen of the Radiant Wood was one of the survivors of the End Times and ascended into a full-fledged deity, protector of the Realm of Ghyran. She created the Sylvaneth through her soul-pods.[1]

Alarielle plants soulpod glades across the Realm of Ghyran from these come the first Sylvaneth, the Oakenbrow Glade and Gnarlroot Glade.[3] She becomes a member of Sigmar's Great Alliance and appointed as Protector of the realm of Ghyran, but as time passed she continued to pine for the lost World-that-was and increasingly desired only to tend to her own Realm of Life. She rued returning to the Vault Celestial for council due to the endless bickering.[2a][3] Alarielle during the Age of Myth ruled from the Verdant Palace.[2b]

Nurgle devastates the realm of Ghyran, infesting it with disease and his plague infused followers and daemons, Alarielle and her peoples resist but as time passes, Nurgle only grows stronger and the realm of life weaker. Eventually, she fled her home and hid for centuries in the Hidden Vale of Athelwyrd. From there she commanded the Sylvaneth through the World Roots in a war called the Hidden War, sending forth powerful enchantments and commands to defeat the invading chaos, but she saw every atrocity and grew despondent and could not bear to look any further. She sought comfort in the simple things of nature and memories of a prosperous past and stopped answering her commanders.[2b] 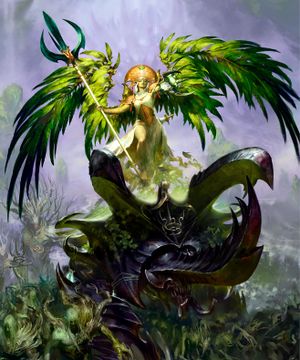 Alarielle, after her rebirth into a warlike aspect during the Age of Sigmar.

Only the arrival of the Stormcast Eternals to the Verdant Palace broke her from her reverie, pacing back and forth, wondering if it was time to leave her mourning aspect and into her war aspect.[2b]

Though Sigmar is an ally and his Stormcasts did help revive Alarielle, she has no interest in reforming his old Pantheon and finds his civilisation of stone and steel saddening and at times irritating.[4][5]

Kurnoth is her consort. Although Alarielle disapproves of his bloodthirsty hunts in Kurnotheal, every spring she receives him in Athelwyrd as her most beloved.[6]

In the Age of Myth, Alarielle was willing to compromise with Nagash and gifted him the land of Decrepita in order to prevent conflict between them. Though the bargain was kept for a time it did not hold. The clash between them was put on hold by the coming Age of Chaos.[6]

Nurgle is anathema to Alarielle. She considers him a curse, a plague, and a violent perversion of all she holds dear. She has been at war with him since the beginning of the Age of Chaos.[6]