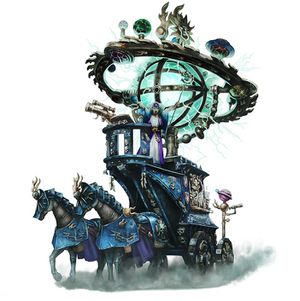 The Celestial Hurricanum is a powerful arcane war machine, and one of the most complex and deadly creations of the Collegiate Arcane.[2a][2b]

The Hurricanum is a chariot bedecked in orreries, foci, and esoteric machinery that is only authorised for use in the most dire of situations. It acts as a mobile aetheric vortex that draws in great lengths of Arcane Energy, which the Acolytes or the Battlemage that crew it use to release the fury of the heavens as a terrifying storm of aetheric lighting, iceshards and blazing comets, referred as the Storm of Shemtek. Collegiate Wizards close to a Hurricanum have their arcane might strengthened by this device, while the magical leaks cause soldiers close to it gain visions of imminent future giving them the ability to strike with uncanny accuracy. [1a][2a][2b]

The carriage is elaborate covered in ornate gothic archs, skull motifs, astrological symbols. Atop the carriage there is an immense orrery that acts as a focus for sorcerous powers. Behind this device there is a viewing platform with skulls, telescopes and arcane instruments for a Battlemage to stand. There is space within the carriage for another acolyte to travel within. The Warhorses that pull this carriage are bedecked in resplendent armour and their hooves are shod in steel.[2a][2b][3]

It can be crewed by Acolytes, armed with Arcane Tools and it is drawn by a pair of Warhorses. It can also be crewed by a Celestial Battlemage, armed with a Wizard's Staff, that known the Chain Lightning and Comet of Casandora spells.[1a][2a][2b]