Teclis was the god of the Realm of Hysh together with his brother Tyrion.[1]

Teclis was awakened by his brother Tyrion in the Realm of Hysh, they, as it's ruling deities were able to shape it to their will, but also serve and protect it. Tyrion can only see through Teclis eyes, so they had to explore this new world together, growing more desperate to find more of their kind. To their joy they found something familiar, Sigmar, but this emotion quickly turned to despair as they learned there were no Aelves outside of Azyrheim. They both swore oaths to join Sigmar and his growing pantheon.[1]

Upon reaching Azyr, Teclis eagerly took the chance to meet the Aelves found, explore it’s vast libraries, and consult venerable ancients such as Dracothian. It was Teclis that gave the people of Azyr scholarship and science. The Illuminator did not stop here, however; he did more to propagate the study of magic throughout the realms more than any other god, helping to found the Collegiate Arcane and tutoring the Eldritch Council in the ways of his lost people. [6]

The most powerful mage of the Realm of Ghyran, Sanasay Bayla begins his quests for Realm's End by visiting the great temple of Teclis the Wise in his home city of Andamar. He climbs the winding stair, drinks a single drop of mona nectar and whispering the necessary incantations he is transported to a world with five suns where he meets the god. Teclis advises him to go to the Iron Temples of the duardin and gain entrance to the required portal, defeat the guardian beyond which only death can kill. Whilst he gives the mage his blessing he warns him that he may not find what he truly desires there. [2]

Once the plot to trap Slaanesh was complete, Teclis withdrew almost completely from Azyr, wanting to ensure the the secret recreation of Aelven society was a success. Being the one that discovered the best way to coax souls from the pleasure god’s grasp, and wanting to improve upon society as he saw fit, Teclis got the first share of souls, who he would name the Cythai. These creations were wrong, however, and fled from his truthful light into the oceans, becoming the Idoneth Deepkin[6]. He sought to destroy these wretches, but his brother Tyrion persuaded him not to.Needs Citation

Learning from his earlier mistakes, he created the Lumineth, Aelves he deemed flawless, despite them having flaws within. [6]

He, Tyrion and Malerion used their powers to obscure Azyr, hiding the creation of the Stormcast Eternals from even Tzeentch himself.[2b] 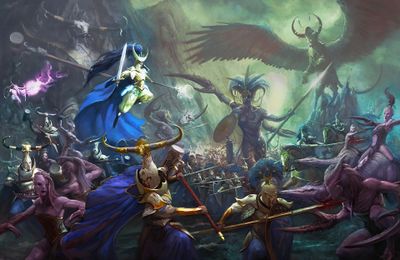 Teclis and Lumineth Realm-lords fighting a horde of Slaanesh Daemons

The Tower of Prios, a tower built by Teclis out of aetherquartz, used it's purifying beam to diminish the Shyish Necroquake.[3]

Morathi warns the Aelven gods of Slaanesh's eventual escape and only Teclis listens to her and seeks her wisdom in secret. He amasses the martial orders of Hysh and invokes ancient pacts with the realms spirits to boost the power of his gleaming warhosts in preparation for a era of conflict to come.[4a]