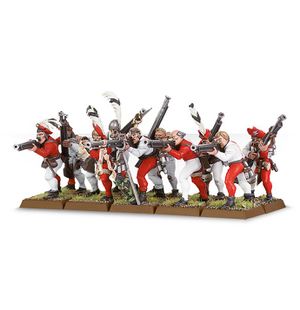 The Freeguild Handgunners are soldiers of the Free Peoples, the Freeguild and the Cities of Sigmar. They support larger infantry units as part of the battle line.[1a][3]

Armed with powerful black-powder weapons that sets them apart from most soldiers in the Mortal Realms, Handgunners are able to pour fire into their enemies, supporting more conventional troops in battle. [1a] As they gain the upper hand, they can close and finish off the wounded enemy with blades. [1b] These can steady their aim by taking their time to prepare or holding their breath. Should an enemy charge they can make one last volley at them, often praying that these shots will blunt their advance.[4][5]

They are led by Marksmen and supported by Standard Bearers and Pipers.[4]

These soldiers are equipped with at least the Freeguild Handgun, long-barreled wheellock firearms, that gives them their name and a Freeguild Dagger, they are led by a Marksman who may be armed with a Long Rifle or a Repeater Handgun. The Long Rifles of the Marksmen have won battles with a single, well-placed crack shot.[1b][4][5]