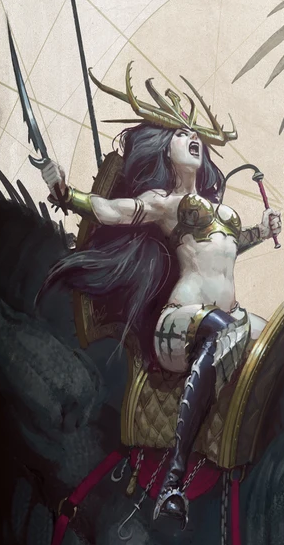 Drusa Kraeth is a Darkling Sorceress in the city of Anvilgard. To the public, she is know as the Matron of the Coven of the Serpent's Blood, an order of Aelf spellcasters serving the city. To others, she is known as 'Voice of The Sovereign', personal representative of the enigmatic leader of the Blackscale Coil.[1]

As the right hand of The Sovereign, or Visharhein[2a] in the language of the Aelfs, Drusa Kraeth is directing the operations of the Coil in Anvilgard. It is said that Drusa Kraeth is one of the few beings to know their true identity.[1] For decades, she has ruled the city from the shadows. From behind a veil of secrecy, she has assambled an army of magical enslaved warriors and enthralled agents throughout every level of Anvilgardian society. Outnumbering the city's own Freeguild regiments.[2a]

Her network of spies allows her to keep a close eye on for possible intrigues within the Blackscale Coil or possible rivals like the Darkling Sorceress Lady Narathel, the Mist-Queen.[2a]

A few months before the Fall of Anvilgard, the Sovereign ordered the Blackscale Coil to engage in a terror campaign across the City of Scales. Influential members of the anvilgardian society were removed one by one. Admirals of Charrwind Fleet, captains of the guard, merchants, priests, politicans, neutralized by the coils agents. Each disappearance sent a new wave of panic and paranoia trough the city. While some whispers accused a dark cabal, hidden in the city's dark underbelly, well placed agents hid the coils trace, blaming Grots, Skaven or even the Anvils of the Heldenhammer instead.[1] While the many fleetmasters, warlocks and lords of the Blackscale Coil have grown rich and powerful over the years, many tried to avoid moving against the city like this. Drusa Kraeth, herald of the Soverign made sure that anyone not willing to fulfill her masters will was soon removed themselves.[1]

Following the arrival of the newborn Goddess Morathi-Khaine, Drusa Kraeth moved out of the shadows and into the open. From the back of her Black Dragon Klarronax, Drusa watched her thrall warriors mercilessly cutting down the city's confused defenders. While they made the Aelfs pay dearly for every inch of ground, one by one the Freeguilders of the Charrwind Rangers were eliminated.[1]

With the mortal defenders of Anvilgard taken care of, the Sorceress directed her forces to move towards the very center of the city of scales, the Black Nexus. Here the forces of Har Kuron laid siege to the Anvil's Stormkeep. Before the Aelven warriors were able to overwhelm the few remaing defenders, Lord-Veritant Keiser Ven Brecht and his army emerged from the catacombs below the Square of the First Rite, challenging the herald of the Sovereign herself.[1]

Trough a cunning ruse, Ven Brecht managed to destabilize the much larger aelven force trough the appearance of the Cogfort Old Firesnout. In the following chaos, Judicator arrows and Ven Brechts Lantern of Abjuration brought down her mount Klarronax. Only the sudden arrival of the Shadow-Queen herself saved Drusa Kraeth from the killing blow.[1] One by one, the last Stormcasts were captured, and with her last defenders gone, Anvilgard had fallen.[1]

Due to their role in the fall of Anvilgard many members of the Coven of the Serpent's Blood were given positions of power within Har Kuron and luxuries of the vacated mansions in Firstwall-on-the-Line. Yet Drusa Kraeth herself was not as lucky as her oversight in not securing the Old Firesnout not only resulted in the loss of her Black Dragon but also the destruction of a large portion of the city forcing Morathi-Khaine to directly intervene. Morathi had planned years to ensure the city would receive as little damage as possible and Drusa Kraeth was punished by being given the responsibility of overseeing the reconstruction of the city.[3a]