Daughters of Khaine is a deadly aelf cult that worships the god of battle and death, Khaine.[1]

In Azyrheim the Grand Conclave regard the daughters of Khaine with wary respect, rightfully considering the cults relationship with the Darkling Covens. Warrior queens rule the cult, fabled blood rituals keeping them strong and seemingly unaging. In battle they and their lithe Witch Aelf followers perform a gory dance of slaughter, feeding the enchanted cauldrons that accompany their warbands. [1] Bloodwrack Medusae ride atop shrines weaving powerful magics whilst shadowy Doomfire Warlocks gallop into battle on dark steeds.[2d] 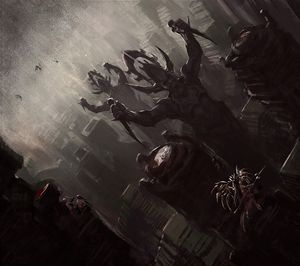 A Temple of Khaine.

The Daughters divide themselves into Sects which worship different aspects of the lost god Khaine, within those sects they follow a strict hierarchy. At the pinnacle is Morathi, the High Oracle, she who speaks with the iron voice of the God and directly beneath her are the High Priestesses - Bloodwrack Medusae, Hag Queens and Slaughter Queens. Some Sects put Slaughter Queens above Hag Queens and vice versa.[2d]

The true Khainites are warriors and divided into two groups, the Scáthborn and the Sisterhood of Blood. The Scáthborn are only partially aelvish in form, souls stolen from the imprisoned god Slaanesh and reformed by Morathi in the Máthcoir - the great cauldron. The Sisterhood are naturally born Witch Aelves and Sisters of Slaughter and only amongst the Kraith are they ranked as highly as the Scáthborn although in all sects, Morathi may choose the most faithful and beautiful to be granted the high honour of being changed into a Medusae.[2d]

The duties of the Daughters of Khaine are not limitted to bloody ritual and battlefield duties, they also serve as gladiators, sword-dancers, assassins, and spies.[3a]

Nearly every major free city hosts a sect of the Daughters of Khaine, also known as covenite sisters, and most host several. Chief amongst these is the eternal city of Azyrheim, which has elements of all major sects within it.[3a]

Every temple has their own Cauldron of Blood.[3a]

Morathi expects her sects to restrain their darker impulses within the domains of the God-King, and when situations get out of hand the High Oracle expects reparations to be paid and examples made of offenders.[3a]

Lowest of all are the Leathanam, the workers and it is in this caste that the majority of the males can be found - Morathi having re-forged the weakest she recovered from Slaanesh into males and even the those now born into the world are also weak, their strength magically siphoned off to boost the Máthcoir and Morathi. A few males however have a connection to Ulgu and flourish, these are tolerated, but branded with control runes that they are told are defensive enchantments against Slaanesh.[2f][3a]