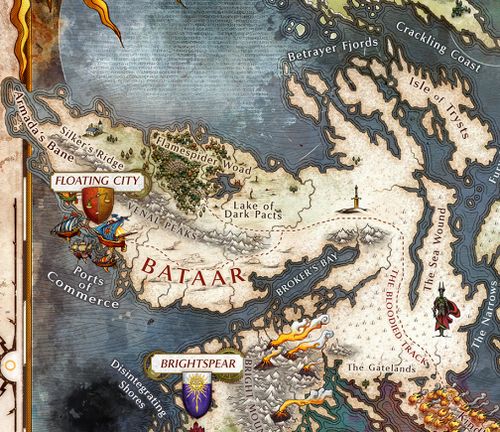 Bataar is an empire of the Great Parch in the Realm of Aqshy, located west of Vitrolia and Golvaria, and north of Aspiria. The Ocean of Swords is found on it north, east and south.[1a][2a]

In the Age of Myth it was renowned for its merchant empire and in particular the Floating City.[1a]

The western regions of the Great Parch, Baatar included, thrived after Sigmar brought order and culture to the continent. Trade expanded into other realms and the merchant lords of Bataar raised great cities. Aspiria and Bataar became rivals but overcame the need to fight with a mixture of diplomacy and channeling the enmity through athletic competitions, driving each other to new heights of progress.[1b]

Bataar grows more powerful through trade and industry. The industry funds mining operations into the Venal Peaks. They pave the Gilded Track into Aspiria and Vitrolia through the Gatelands. Not content to wait for customers to come to them they build a vast seaborne city to go to them, the Floating Market. Then they make a great deal with Aspiria to enchant the city to fly.[1b]

The Beastbridge is conquered by orruk tribes which exhort or slay any trying to pass through it. The Aspirians ignite the Kindling Forest with magic creating a permanennt barrier between the civilizing west and the middle reaches. The merchant lords of Bataar leave the tribes of the middle reaches after they fall to civil war.[1b]

As the Golvarians and the Vitrolians are about to attack Aspirian caravans going through the Beastbridge, the merchant lords of Bataar buy the Vitrolian allegiance with gold, resulting in a crushing defeat for the Golvarians.[1b]

After the Red Feast, Daemons of Khorne invade the Great Parch and the horrified merchant lords of Bataar abandon the tribes to their fate hiding behind walls of fire and steel.[1b]

A vast Plague Fleet leaves Cotha to attack Bataar, destroying the navy of Bataar in a week-long battle. The wrecks come to coast on the region called the Armada's Bane. The Aqua Ghyranis that was transported by the Floating Market wash up the coast of several regions, and while many are recovered many are tainted and spread disease instead.[1b]

The Gilded Track was conquered by countless chaos warbands and enslaved the merchants of Bataar. Under the lashes of Bloodstokers they were forced to walk barefoot, carrying their carefully marshalled gold across sharp volcanic stones. Because of this the road becomes known as the Bloodied Track.[1b]

Night soil collectors are often in high demand as they can supply the cities aerial gardens with a constant supply of compost. [3a]

The Far Traders of Bataar battle daily with the merchant princes of the Realms of Azyr and Shyish. [3b] 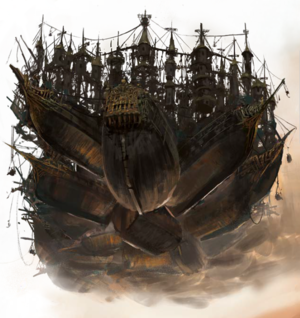 The Floating Market of Bataar

Some of the known locations on this continent are:

Several successful Dawnbringer Crusades have seen the founding of a number of new Sigmarite Strongpoints:[5a]

The gap between Bataar and Vitrolia is called The Narrows.[1a]

Bataar has many lucrative industries like mineral forges and textile farms of firesilk. These often fund other business like mining operations on the Venal Peaks.[1b]