From Age of Sigmar - Lexicanum
(Redirected from Stormcast)
Jump to: navigation, search 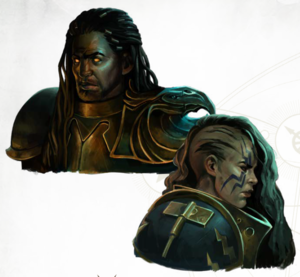 Stormcast Eternals are Sigmar's immortal warriors clad in Sigmarite armor - his "vengeance made manifest"[4a] - and his final gambit against the forces of Chaos. This immense army of magical beings was created by Grungni, his Six Smiths and Sigmar during five centuries of intense forging, Sigmar then released them upon Mortal Realms. Their sole purpose is to liberate the realms from the ruinous clutches of Chaos and finally destroy the rulers of damnation.[4b][18]

Stormcast Eternals were once mortal heroes, plucked from countless battlefields to undergo a series of long and agonizing trials[4b] in the Realm of Azyr. Reforged by this process, both in body and mind, they emerged as immortal golden warriors.[1][2] Such is their physical transformation that they tower over mortal men[4a] and lighting runs through their veins. Their armour is reforged from the enchanted remains of the world-that-was.[4b]

Even upon death the Stormcast Eternals cannot escape their righteous purpose. A slain Stormcast Eternal is born anew and sent back into the fray once more. This Reforging, however, changes a warrior in strange ways. Lord-Arcanums can use their mastery on storm energies to capture the souls of slain Stormcasts before the thunder brings them back to Azyr, then they can restore them to fight again.[18] Even though Lord-Relictors haven't this power, Ionus Cryptborn seems to be able to use it thanks to his reliquiary.[4a][21]

They ride twin-tailed azure lighting to the Mortal Realms and can only return to Azyrheim through the Realmgates or by death.[4b][10a]

The hammer symbolizes Ghal Maraz, while the lighting symbolizes the Sigmarabulum. They have parchments written with mysterious script on their bodies[4a], which represents sigils of victory and conquest.[17]

After the Battle of Burning Skies, Sigmar closed the Gates of Azyr and brooded on what to do while entire civilations were slaughtered or enslaved in seven Realms. After an unknown amount of time, the eternal reincarnation of the children of Dracothion inspired Sigmar, who decided to use mortal souls and reforge them as a new army of warrior imbued with a portion of his divine power.[18] Grungni aided Sigmar by forging the Sigmarabulum, the Anvil of Apotheosis and the Crucibles of Reforging. When he felt guilty for remaining on Azyr, an act which resulted in abandoning duardins who followed him, Grungni assembled the Six Smiths and passed his duties on them, then he vanished.[19] The Six Smiths used an enchanted metal called sigmarite to forge armours and weapons[16], while Sigmar picked heroes from every corner of the Mortal Realms, choosing from souls of men and women who he saw dying trying to repel Chaos invaders, already dead in an underworld of Shyish or around the remains of Mallus.[18][20] They were transported to Sigmaron and Reforged upon the Anvil of Apotheosis as bigger, stronger and with a new identity. Even though Tyrion, Teclis and Malerion had already left the Pantheon, their last aid was really helpful. They clouded the aether around Azyr, making impossible to see what happened on that Realm, even to powerful sorcerers like Tzeentch, the Architect of Fate.[12b] First of the Stormcast Eternals was the warrior who would be named Celestant-Prime, then came all the others.[17]

During all the remaining years of the Age of Chaos, the Stormcast Eternals trained and freed Azyr from every sort of corruption. When the right time came, Sigmar hurled the Hammers of Sigmar on the Brimstone Peninsula for the first time. Thus The Long Wait ended and the Age of Sigmar begun.[12b][19] 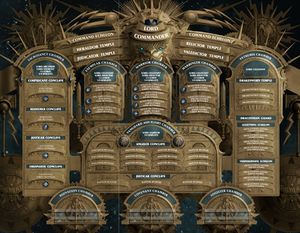 The Stormcast Eternals are divided into autonomous armies known as Stormhosts, each with it's own heraldry and history, of which only Sigmar knows their true number. Each Stormhost is divided into a Command Echelon, Temples and several types of Chambers. Each Chamber is further divided in different types of Conclaves or Echelons. Finally, Conclaves contain several retinues.[4b][18]

A Conclave is a division of the Stormcast Eternals, training and equipping retinues of a Stormhost for specific roles on the battlefield. Stormcast Eternals who have been reforged must go through their Conclave before they are considered fit to resume their duties.[17a]

There are the following Conclaves:

Only the mightiest of mankind's warriors get to be aspirants to becoming a stormcast, taken from battlefields in a blinding flash and rolling thunder and transported into Sigmaron. Before they suffer through the Reforging they must first build their strength, spending three days and night in the endless feast in the Heldenhall.[12a] Being mighty doesn't only mean being strong in the body, but being heroes who stood up against their oppressors, regardless of whether they were nobles, soldiers or ordinary men and women.[18]

After being selected, they are taken into the Chamber of the Broken World and are blasted apart by lightnings and are reforged anew in the Forge Eternal. This agonising process can last for a few heartbeats or many centuries and not all survive it. Then they must suffer through the seven times seven Cairns of Tempering where their bodies and souls are mixed with the Gift of Gods. Finally they are wrought on the Anvil of the Apotheosis, where they're focused into a new form by the Six Smiths. If they survive, they receive the last blessings of the World Hammer and awaken imbued with a portion of Sigmar's power.[12a] After the creation of the Sacrosanct Chamber, the part of the process that takes place upon the Anvil of the Apotheosis is surveilled and supported by Lord-Arcanums and Knight-Incantors. Knights-Incantors sing the music of the spheres which calms and orients souls that are being transformed or reforged, while Lord-Arcanums can capture rogue ones and send them back to the Anvil.[18][20]

Stormcast Eternals trained by hunting down the many enclaves of Orruks and creatures that bore the taint of chaos. None of the mythic beasts of Azyr have any trace of corruption. Besides monster hunting in Azyrheim, they also trained in the Gladitorium, a magical dome that allows one to combat freely and arise unharmed from within.[16] During the Long Wait, Stormcast Eternals practiced to master every strategy and technique of war. Phalanxes, spear-tip assaults, great shield walls and many more.[18] Further training is provided by other specific trials, like the Trials of Starwalking required to become a member of the extremis-chambers.[17]

Stormcast Eternals are equipped with different types of sigmarite armour and a wide range of magical weapons. All armours and weapons are made of sigmarite, giving them the ability to transform themselves into celestial energy when the wielder is slain and being trasported back to Azyr to be repaired. The Six Smiths use different heavenly storms based on the weapons they want to forge. For instance, the Azheden Thunderhead is good for warhammers, while the Ayorrian Maelstrom is good for skybolts. Some weapons are further blessed and empowered by celestial energy during sacred cycles which make them relics fit for Lords, Knights or Primes. Unlike Reforging, the process used to forge sigmarite weapons is flawless. All weakness is purged during construction and a kinship is formed between weapon and wielder, making it far stronger than it would be in mortals' hands.[17]

After its cleansing, the Realm of Azyr was still populated by a great number of creatures. Some of them became steeds or companions for many Stormcasts.