From Age of Sigmar - Lexicanum
(Redirected from Hammerhal Ghyra)
Jump to: navigation, search 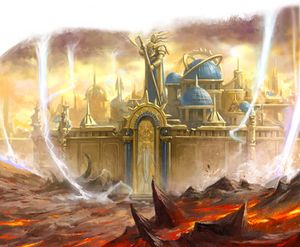 Hammerhal, also known as the Twin-Tailed City, is the greatest and the spirit capital of the Cities of Sigmar, cities built after the end of the Realmgate Wars around the Realmgates claimed by the Stormcast Eternals. It's known as the Twin-tailed City because it's two settlements, Hammerhal Aqsha and Hammerhal Ghyra, ruled as one, one on each side of the Stormrift Realmgate.[1]

Before being reclaimed, thirty chambers struck at both sides of the Stormrift Realmgate battling the orruk tribes who worshipped it as the Maw of Mork. Their tribal kingdoms had long fought over the mystic portal, raising sprawling fortifications upon its twinned thresholds and invading one another through its crackling depths. Given common purpose by the Stormcast attack, the Morkmaw tribes unified. Only after long years of fighting - and with the aid of the Hallowed Knights, the Anvils of the Heldenhammer and several other Stormhosts - did Sigmar's warrior at last defeat the orruk scourge. To the Hammers of Sigmar went the honours of raising the first Stormkeeps around the Realmgate.[4a] The city that followed was named after them.[1][12b]

Reaching up from the bedrock on both sides of the Stormrift, Sigmar's warriors discovered rich outcroppings of realmstone. Formed from the concentrated magics of the Mortal Realms, these volatile crystals were a valuable yet dangerous source of arcane power first harnessed by the renowned architect Valius Maliti. The energies that poured from their central lodeshards were crucial in speeding along the construction of Hammerhal, fuelling the efforts of the Ironweld engineers to raise new defences and expand the city's boundaries. It was the engineers who - with the aid of the Lord-Relictors - caged the energies of the realmstone, building elaborate sigmarite machinery around them to harness their volatile sorcerous emanations. In Hammerhal Aqsha, those wrathful energies powers a vast shield of flickering lightning, while Hammerhal Ghyra funnels them into protective wards to confuse and misdirect hostile invaders.[4c]

As one of the new cities reclaimed by order during the Age of Sigmar in the Great Parch it starts to thrive as philosophy, art and fashion begin to develop once again.[1a][1b]

In the Time of Tribulations the two hundred and forty-four Lords of the Heavenhall debated fiercely about what action to take before Morathi the High Oracle of Khaine arrived. She quickly addressed them all and stated that This council must put aside its differences immediately and send every available army to Shyish, or the forces of death will overwhelm us. Despite some initial opposition she convinces them to send the cities armies to join her own in attacking the Realm of Shyish [8]

In the aftermath of the Necroquake the dead arose across the Realms and in Hammerhal Ghyra they clawed their way out of the tombs in the Azyrite necropoli or the blessed soil of the Shadeglens and the defenders of the city were hard pressed to destroy them.[10a] Meanwhile in Hammerhal Aqsha, forgotten armies of deathrattle warriors suddenly stirred themselves and tore free from the boiling mud-flats and marched on the walls.[10b]

At the start of the Arcanum Optimar the Endless Spell known as the Purple Death was unleashed upon the streets of Hammerhal.[11]

Hammerhal Aqsha is a bustling metropolis located in the Great Parch in Aqshy. It's a harsh and heavy fortified place with towering bastions and batteries. It's many pendants and banners dance on hot, angry winds. It is protected by lighting shields while mobile forts seek to expand the city boundaries.[1][12a] It is named after the Aqshai River situated in the western end of the city.[20a]

The cities defences are maintained by the genius of the Ironweld Arsenal, which have a strong presence in the city. The surrounding land is purified by the self-flagellating processions of Devoted of Sigmar.[1]

In exchange for a steady supply of foodstuff from Ghyra, Aqsha provides a constant stream of molten rocks.[1]

Hammerhal Ghyra is located in the Jade Kingdom of Verdia in Ghyran is a city of golden domes and celestial spires. The city itself is highly decentralized, sections of it are built in between gigantic mountain terraces wrapped around the fertile mountains of the region.[14b] These immense fields are worked by enormous beetles, dragging massive plows trough the fertile earth, while torrents of water pour down from Mammoth Drift-Isles, each of them kept in place by chains of Ironoaks [14b]. In exchange for food and military support, Hammerhal Aqsha channels rivers of lava trough the Stormrift Realmgate, burning away the rapidly growing flora, threatening to overwhelm the city. Carefully cut trenches form walls of fire that hold back the plants of Ghyran.[1][14b] The air is noted by many visitors as tasting of cinders and smoke and the atmosphere as wet and humid. [3b] It is known as a stronghold of aelf-kind, many Free Peoples[1] and a sizable population of Sylvaneth[14b] with parts of the city given over to vast groves of trees.[3c]

Of the one-hundred and twenty-two seats representing Hammerhal Aqsha, half are held by members of the Azyrite nobility of the city. Despite this there are a number of Aqshian dynasties that hold major political positions in the city. Chief amongst these are House Vanx, House Taladin, and House Naffir who have all had members hold office as Master Patriarch or Master Matriarch.[20a]

As the foremost sanctuary for the free peoples of the realms, Hammerhal's population has grown both in size and diversity. Darkling Covens thrive in the grimmer quarters of the city. Wanderers live in nomadic caravans and treetop camps in the gardens of Ghyra. The industrial expertise of the Dispossessed is vital for the constantly expanding cities. Due to the constant expansion regions of the city are swift to rise and fall in prominence, with formerly vital trading posts fading into insignificance. The vast populations of aelves, duardin and humans has also caused a housing crisis and widespread inequality. While the noble quarters such as the gleaming spire-towers of Goldpath or the garden villas of Sanctor Tulis are the envy of the realms, millions more citizens live in crime-ridden slums such as the Cinderfall district and the gloomy warrens of Blackwood Town. While life in these districts may be bleak they breed tough, hard-bitten souls who make for excellent soldiers and are given a path to glory and renown through service in the Freeguild.[13a]

The bawdy houses found within the Twin-Tailed City are especially infamous.[14b]

By day, thousands of skyvessels, skycutters ,lava-cogs and Sylvaneth winged beetle mounts make their way to dock at the city's trading districts through the immense chasm that runs through the city which forms a natural trading route, and the rift-docks echo to the sounds of sailors and labourers shifting a bewildering array of exotic cargo and livestock from their vessels to the merchants' stalls and the dockside warehouses. Riftsiders tend to be hardy, practical folk, well-muscled and sun-beaten from many years of physical toil undertaken in the blazing heat.[4b][13a]

There is a constant flow of molten rock from Aqsha to Ghyra and in return Ghyra supplies vast shipments of grain, meat and Aqua Ghyranis.[1] Ghyra imports both stone and timber for building as the inhabitants are forbidden from logging in the realm as per the ancient laws of Alarielle, this is strictly enforced by the local Sylvaneth.[3e] Ghyra uses its carefully channelled flow of molten rock to direct broad defensive canals in order to hold back the overwhelming fecundity of the Realm of Life.[4c] There is almost nothing that cannot be found within Hammerhal's sprawling market districts and the vaults of Hammerhal are filled with wonders and treasures from across the realms, claimed through battle or exploration.[13a]

A wide variety of currencies both local and foreign is accepted in the markets of Hammerhal, the most well-known of these currencies is Aqua Ghyranis. Comets, Flaregilt, and Embers are among the local currencies used by the citizens of the city.[1][27][28a][29a]

Goods from Hammerhal Aqsha and Vandium travel northward along the Great Ash Road to the city of Edassa, and from there much needed supplies flow through to the lands and settlements of the Flamescar Plateau. The seemingly cursed city of Anvalor was able to be built thanks to this extensive trade route.[1a]

Thousands of vessels, and the flying beetles of the Sylvaneth bring goods in and out of the Hammerhal Aqsha every day, many of them aerial craft but some ply the lava rivers of Capilaria to reach the city as well. These vessels carry ingots of mystic metals, gems of every variety, cut, and hue, shards of shadeglass, logs of ivory, ironoak, megalofin teeth, beads of amber, salted meats, fyresteel blades, and many more goods from across every Mortal Realm.[14a]

A network of Realmgates connects Aqsha with Tempest's Eye, Anvilgard, and Hallowheart allowing the four cities to engage in heavy trade. In particular many Hammerhalian weapons are traded for Golvarian minerals and primordial Realmstone from the mines of Hallowheart.[20b]

Ghyra sits at the center of many trade networks, serving as a crucial supplier of foodstuffs to countless other settlements.[26a]

Hammerhalians prize martial ability and stubborn resolve and its standing armies are amongst the largest and best-equipped available to the God-King. The line infantry of the city's Freeguilds are known as the Goldjackets who are famed for their fighting ability and unwillingness to retreat, easily recognizable by their gleaming-breastplates. All of the city's military guilds claim are fiercely proud of their heritage, carrying banners of rare provenance woven from Hyshian suncloth and stitched with the skin and bones of martyrs that are carried into battle to inspire the soldiers, some claim their banners are in fact the battle standards of their progenitor tribes dating back all the way to the flight to the Realm of Heavens after the dawn of the Age of Chaos. In the only instance, of these colours falling into enemy hands, the Griffon Spears Freeguild embarked upon a suicidal cavalry charge against a greenskin horde eight times their number known as the Forlorn Charge. The Twin-tailed City can deploy almost any specialist formation ranging from handgunners and swordsmen backed up by all manner of auxiliary formations, chosen according to the needs of the campaign including Shadow Warriors, fleets of Gyrobombers or the magical war machines of the Collegiate Arcane. [13a][20b][20c]

There are many Freeguilds operating within the Twin-Tailed City, with Hammerhal Aqsha alone boasting seventeen major Freeguilds comprised of over a hundred regiments each. These include the Golden Lions, the Scions of the Comet, the Leaden Bulls, the Heldenhain, the Sun Seekers, the Boldhearts, and the Vandusian Guard.[20c]

An entire district of Hammerhal Aqsha was transformed into the Acadamae Martial, a combined training ground and barracks, complete with mustering fields where officers of the city's armies study and the renowned Dragoon-Generals of Hammerhal are the elite graduates of these schools.[13a]

Chambers of the Hallowed Knights are part of the powerful military forces of Hammerhal and have sworn an oath that Hammerhal Ghyra will not fall while the faithful stand.[3]

The city of Hammerhal contains a substantial amount of suburbs and conurbations that are used for agrarian purposes, many of which are packed around the outermost walls of the Twin-Tailed City.[14b] 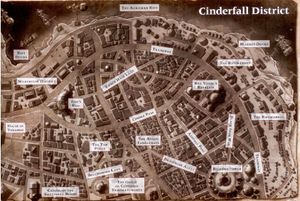 Map of the Cinderfall District.[4] 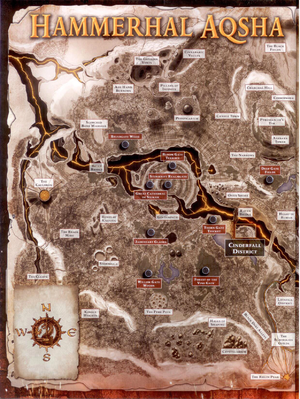 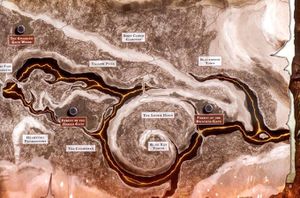 The city is home to a vast population of Free Peoples.[20a]

An expansive noble class dominates the politics of Hammerhalian society, with a full half of Hammerhal Aqsha's one-hundred and twenty-two seats of the Grand Conclave held by members of Azyrite noble families. A number of Aqshian dynasties have risen to power in Aqsha's Old City as well.[20a]