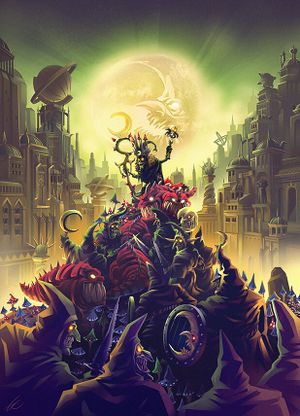 Draconium was a large fortified border city in the Realm of Aqshy located two hundred and eighty-two miles to the north of Hammerhal Aqsha. [1a][1b]

The city dominated the Drake's Jaw pass in the volcanic Redspine Range, its springs were used to feed a canal that troop barques and trade barges traverse the reconsecrated area north of Hammerhal. [1a]

It was destroyed by the Bad Moon and an army of the Gloomspite Gitz lead by Skragrott the Loonking. [1]

It had a substantial wall, the southern part of it blocking the mountain pass completely, with the gate house made from iron-banded marble and guarded by am immense portcullis. [1d]