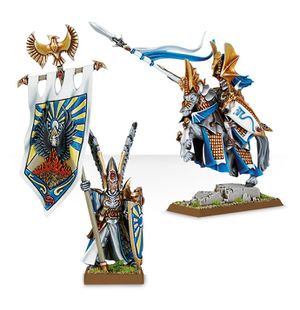 Dragons Nobles are Aelven commanders of the Order Draconis armies. They are extremely prideful beings, for they are taught since young age to have a deep sense of honour and a mastery over diplomacy and war. At war they are very flexible, excelling at commanding armies from a distance and directing it's flow as well as having unmatched skill in melee. Their presence is able to inspire his fellows to succeed at hitting their foes.[1][2a]

They can go to war on foot or mounted on an Aelven Purebreed.[1][2a]

They wield weapons like Enchanted Polearms or Starblades and some pair these weapons with an Enchanted Shields or a magical Reaver Bows. If they are riding on a Aelven Purebreed they may take a Star Lance or a Starblade paired with an Enchanted Shield, while their mounts attack with Ithilmar-shod hooves. Some will be granted the honour of carrying a Phoenix Banner, that makes charges near them more likely to reach a further distance.[1][2a]