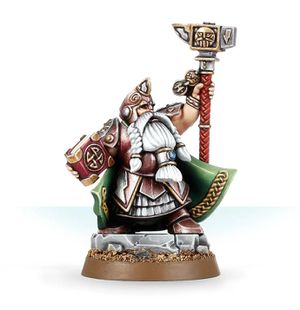 Runelords are the Duardin priests, runeforgers and custodians of ancient lore of the Dispossessed armies. The secrets and rituals of their hammercraft and rune-shaping is guarded jealously for they are naturally suspicious. [1][2]

The skills of a Runelord is passed only those descendants deemed worthy, otherwise it's taken to the grave.[1][2]

They can forge magical items using powerful runes. Runelords can use rituals of hammercraft to channel, dampen or unbind hostile magic, with ancient Runes of Spellbreaking. They can also pray upon the latent magic of runic engravings and their Ancestor Gods to imbue weapons and armour with ancient power, through the Ancestral Shield or the Forgefire prayers.[1][2]

They go to battle armed with a Forgehammer and a Runestaff, but also carry tools of their craft like an ornate tome or a blazing rune help by a pair of tongs.[1][2]