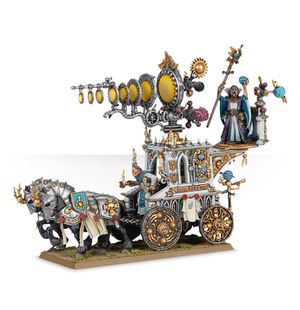 Luminarks of Hysh are powerful arcane war machines, pulled by a pair of Warhorses, deployed by the Collegiate Arcane.

A Luminark consists of a series of focal lenses crafted from pure, refined aetherquartz the crystallised essence of the Realm of Light. When magical energy is focused through the arcane optics, it unleashes a searing beam of soulfire than vaporises everything in its path with the power to penetrate a Dreadhold's walls or to instantly burn a gargant to ashes.[1a][3]

Luminarks of Hysh are surrounded by a protective magical aura giving protection to both the machine and those near it. The Luminark also fills the minds of nearby spellcasters with the light of Hysh, allowing them to utter words of unbinding with pristine clarity.[2a]

The carriage is elaborate covered in ornate gothic archs, skull motifs, astrological symbols and candles. Atop the carriage there is a enormous devices bedecked in icons and with lenses of increasing sizes. Behind these lenses there is a platform that can carry an Acolyte. There is space within the carriage for another acolyte to travel within. The Warhorses that pull this carriage are bedecked in resplendent armour and their hooves are shod in steel.[2a][3]

The complex mechanisms of a Luminark is maintained by a senior White Battlemage, through he is not required to go to battle, aided by a group of acolytes. Those that attempt to destroy the machine are blasted away by the spells of the Battlemage and his Wizard's Staff and the acolytes are also armed with various Arcane Tools. The White Battlemage knows the spells Burning Gaze and Pha's Protection.[1a][2a][2b]