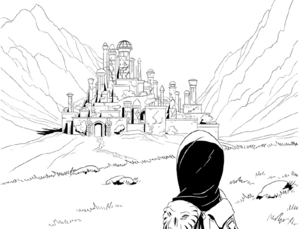 Lifestone is a city nestled in a valley found between the Houndstooth Mountains and Everlight River. Once it was a thriving metropolis that benefited from the protection of Alarielle the Everqueen, but it has since fallen into hard times and disrepair.[1a] A forest known as the Stonewoods is found nearby.[1c]

Once Lifestone was a grand metropolis, but a great cataclysm struck the city which caused it to fall into disrepair. Strangely neither those who remained in the city nor those who fled the city can recall what manner of cataclysm affected the city.[1a][1b]

The City of Lifestone has been ruled for generations by the Lords of Lifestone, whose duty it is to govern and protect the city.[2a] The Lord of Lifestone also commands the Lifestone Defenders.[1e] The current Lord of Lifestone is a man known as Elias Stonehand, who had the ill-luck of assuming the lordship during Lifestone's strange decay.[2a]

Before the city began to wither and fall apart, it was known as a center of learning and healing. People would travel for many leagues to reach Lifestone, to seek aid from it's famed healers.[1c]

The City of Lifestone is surrounded by sold walls of granite that offer protection from invaders and like many other cities of Order it is defended by soldiers of the Freeguild known as the Lifestone Defenders.[1c][1e]

The city has fallen onto hard times after a mysterious cataclysm and many of it's people have become distrustful and resentful of outsiders. The main market of the city is a dour place, where folk shop and barter in eerie silence and stalls line the courtyard. These stalls sell root vegetables, hard bread, eggs the size of a child's head, rhinox meat, and grain.[1a][1c]

The city's primary currency is coins.[1c]

At it's height the City of Lifestone was a metropolis full of life. It had many orchards, gardens, sparkling fountains, and renowned places of healing. But all of those fell into disrepair after the city was struck by a mysterious cataclysm. Now the city's great, stone manses are battered and worn, it's spires are crumbling, and many of it's citizens live in huts on the lower slopes of the valley or amidst the ruins.[1c]

The people of Lifestone are an insular and self-centered people, who resent outsiders and travelers. Their hostility born from whatever strange cataclysm led to the deterioration of their great city.[1a] Even in it's state of disrepair the city is home to both Humans and Duardin.[1c]