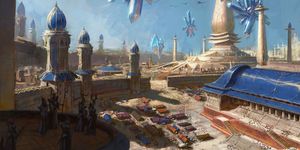 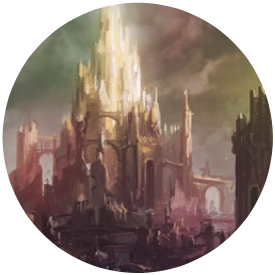 The spires of the city

Settler's Gain, or Yllurai Xhen in the tongue of the Lumineth, is a Free City in the lands of Xintil, in the Realm of Hysh. The glimmering city is known as the greatest Sigmarite settlement in Hysh, and held as an example of the ideal city, an utopia of learning and wonder.[1a][3a]

While many of the cities of Sigmar are alive with the sounds of industry, the air filled with dark fumes and smoke, the skies above Settler's Gain are clear and unpolluted. Instead of the ringing of hammers, melodic singing and the faint noise of stimulating debates hangs in the air.[3a]

Every part of the city, from the paving of the roads to the crystals floating above, are placed following Xintilogical ideas, meant to aid in the process of refining one's mind and soul.[1a] Like the spokes of a wheel, clean and tidy districts stretch in every direction underneath the tall and elegant spires at the city's heart. Even the house of the lowest peasant is symmetrical and perfectly ordered according to these principals.[3a]

Most of the city's menial labour is taken care of by solar-powered automata of Lumineth design. So that the citizen can focus on the pursuit of knowledge, and the task of ascending the city's tall, prism-topped spires.[1a]

It was the Lumineth that allowed the founding of the city in the lands of Xintil, at the hearth of Hysh. And to this day, they hold sway over the governance of Yllurai Xhen, as they insist on calling the city. Some even say its them, and not the Grand Conclave or the Tempest Lords who rule the city.[3a]

The city is built around a meritocratic system of philosophical, arcane and theological tests. Those that pass the rigorous testing process are allowed to climb another level, moving up the city's tall towers[1a]. The final test for each applicant is to ascend the highest spire unassisted. With no stairs or lift to aid their ascend, the applicants are forced to turn to arcane means. Some master the art of levitation, while others enlist the help of the Opterids, insectoid creatures living in the high skies above Hysh. While each applicant may be skilled, this trial isnt without its dangers, and many fall to their death before ever reaching the top.[3a] Those selected few that survive these challenges are refered to as Enlightened by the Lumineth. As a reward, they are introduced to new levels of Enlightenment and even more tests and trials.[3a]

While those, that don't meet the high standards of the Lumineth Invigilators are forced to stay behind. Very few non-aelfs have ever passed these trials, as they require decades of intense studying and training. Time that very few outside of the long-lived Aelven race can afford.[1a]

The growing number of those unable to ascend are known as the Earthbound. Those, mostly human, citizen are confined to what is known as the 'Simple Districts', a name which, as the Lumineth insist, stems from the construction style of these neighbourhoods.[3a] Slowly, resentment against the city's system is growing. To prevent unrest, the leaders of Settler's Gain have started to take away troublemakers, 'to show them the error of their ways' via the crystalline Enlightenment Prisms. What exactly happens inside of these is unknown to all but the highest echelons of power. But still, the majority of those taken away are eventually released, seemingly having abandoned their former ways.[3a] Others are simply sent out into the realms, on military expeditions, diplomatic missions or as missionaries for the city's ways.[1a]

Yet, there are always waves of colonists from the other realms waiting for a chance to make a home in Settler's Gain. Each batch of applicants is screened by the Light Wizards of the Hierophantic Academy. Assigning each and everyone a role in society. Most of them take up the few menial tasks not taken care off by the city's automata, like construction or other physical tasks. While those rare few that show magical potential are allowed to take up the magical studies.[3a]

The defenders of Settler's Gain are made up of small, but elite volunteer units. Organized around strictly meritocratic principles, the city's Freeguilds are lead by skilled commanders, and accompanied by the most advanced magical war machines in Sigmar's Empire. Settler's Gain is especially known for it's Luminarks. Directed by those Battlemages that have ascended the city's spires, the searing beams of these war machines can even melt solid metal.[3a] Many of the volunteers who join the city's armies hope to impress the aelf Invigilators, while others join to escape the endless tests and trials forced onto them.[3a]

At last, the city itself is protected by an alabaster perimeter wall with warding sigils carved very ten metres. [2a] 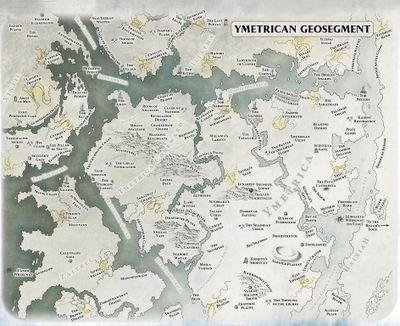 The city of Settler's Gain on the coast of the Girdlesea

The city was attacked by a horde of Nighthaunts, some of the sigils having been deactivated by agents of Nagash, their locations communicated to the Knights of Shrouds leading the attacking army. As light flares burst abouve the city to warn of the invasion, the Freeguild tried to hold the compromised walls but were quickly being overwhelmed despite their best efforts and those skilled in the magical arts around which pockets of resistance formed. [2a]

A counter attack was launched by the Lumineth. Dawnriders charging home and volleys of arrows from Auralan Wardens taking a heavy toll of the undead. The master of the cities Collegiate Arcane, Arcobalde Lazerne entered the fray with his Luminak of Hysh, Beacon of Intellect, its beams burning dozens of gheists to nothing in an instant. Yet the undead only grew in number and the end seemed inevitable. [2a]

Then the Lunasphinx Celennar, spirit of the Realm's moon arrived, its light annihilating any spirit it touched then called upon Teclis himself who appeared and in seconds destroyed a great many of the undead. Few of the Nighthaunt leaders survived the initial onslaught, fleeing to bring word of the disaster to their Master. The rest of the night and the next day were spent purging the city of the remnants of the dead. Settler's Gain lost several thousand dead, with hundreds of souls taken by Nagash. [2a]

During the final battle between Nagash and Teclis on top of Mount Avalenor, it were the armies of Settler's Gain that created the opportunity for Teclis to prevail over the Great Necromancer. Transported trough a portal created by Celennar, six Luminarks of Hysh lead by the Beacon of Intellect channeled the light of the Tower of Prios, blinding Nagash.[2b]