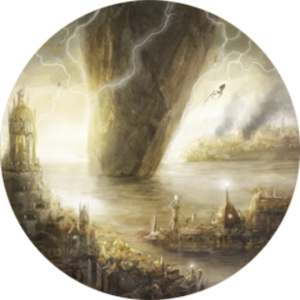 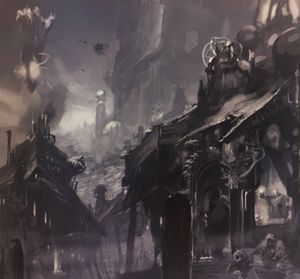 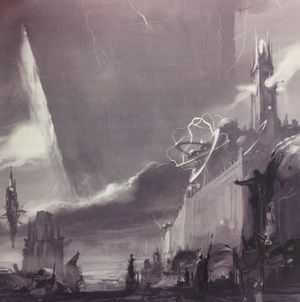 The Spear of Mallus in Excelsis.

Excelsis is one of the Cities of Sigmar built after the Realmgate Wars. It's located in the Coast of Tusks on Ghur and is described as prophecy-rich.[1][2]

Excelsis was founded after the end of the Realmgate Wars, around the Spear of Mallus a fragment of the World-That-Was. This stone allowed to see the future and help make the city rich and relevant. The Spear of Mallus grew to be so important that the currency of Excelsis, Glimmerings, would be made solely from fragments of this stone. Said fragments would allow their owners to see, if for a while, the future, hence why Excelsis is described as being rich in prophecy.[1] In more than thirty years, Excelsis' borders were expanded and its population doubled until there was no space left for housing. Excelsis's craftsmen decided to keep building anyway, making the city a labyrinthine network of alleyways called Veins.[2a]

The Knights Excelsior sense the taint of Chaos corruption and respond with a brutal purge, known as the First Purge of Excelsis, that lays waste to almost a quarter of the city's populace. This is where Cerrus Sentanus becomes known as the White Reaper.[9]

The city was devastated in the Uprising of the Cult of the Fated Path, with both the Archmage and High Arbiter betraying the city. Much of the city was destroyed and two Freeguild regiments were disbanded. But the uprising was put down and the city was rebuilt afterwards.[2c][4]

At the beginning of the search for the Eight Lamentations, Excelsis was besieged by a substantial skaven army under the command of Kretch Warpfang, Grand High Clawmaster of Clan Rictus.[3]

The attacks by the forces of Tzeentch led to the rise of the Nullstone Brotherhood which led purges against Tzeentch cultists but increasingly overstepped their bounds, hunting wizards and later targeting Aelves as their obsession resulted in it becoming corrupted by Slaanesh. During the beginning of the Era of the Beast the city was again attacked by Skaven led by Warlock-Engineers that brought devastating warmachines into the city. While the attack was repelled soon a massive army of forces of Destruction led by the newly awakened God of Earthquakes Kragnos as well as Gordrakk and Skragrott laid siege to the city's walls. Using the confusion Dexcessa and Synessa the true masters behind the Nullstone Brotherhood manifested within the city bringing a host Slaaneshi daemons.[17a]

The city was saved with the arrival of Seraphon under Lord Kroak and Daughters of Khaine under Morathi-Khaine who lured Kragnos away through a portal while the White Reaper and the Witch Hunters Galen and Doralia ven Denst banished the Slaaneshi twins. [17a]

Excelsis is ruled by the High Arbiter, who wields both the powers of the courts and the constabulary. He lives in the Palace of the High Arbiter and has his personal bodyguards called the Palantine Guard.[2a]

The city of Excelsis is a heavily defended city. Within it are elements from three of Sigmar's Stormhosts, at least eight regiments of the Freeguild which alternate between garrison duty and joining the Stormcast in defending the city by ranging afield, and many other defenders besides.[2]

There are chambers from three Stormhosts in the city:

There have been at least ten regiments based in Excelsis which, some of which even maintain heavy artillery and Steam Tanks made by the Ironweld Arsenal. Known Excelsis regiments are the following:

Excelsis lacks natural deposits of metal and so silksteel shipped in from the border town of Marshpoint is vital for outfitting the city's Freeguild regiments.[4]

A part of Excelsis defence formed by a variety of aircraft, including Gyrocopters.[2c]

The Palatine Guard is a group of soldiers charged with the defense of the Palace of High Arbiter. They're hand-picked veterans, blue-blooded Azyrites trained in the art of war from youth. They wear rich purple tunics and breaches, cream tabards, shining gold greaves, pauldrons, helms and breastplates armour covered with intricate scripture and engravings of Ghal Maraz. Their helms are full-faced, with a scale neck-guard, sculpted to represent a star-eagle in flight and with a tapered dome that ends in a voluminous white and blue plume. They're equipped with halberds and hardwood repeater crossbows, but some of them also carry a silver rapier on one hip. During the uprising of the Cult of the Fated Path, the Palatine Guard betrayed the city folllowing the High Arbiter Ortam Vermyre.[2b]

Underground regions of Excelsis are home to Dispossessed Duardin. During the attack by Clan Rictus the Duardin fought back Skaven sappers underground countering hundreds of Skaven tunnelling attempts. [3]

Three Realmgates can be found within a hundred mile-radius of the Free City of Excelsis.[12a]

The bawdy houses of Excelsis are well known across the Mortal Realms.[11a]

Minerals are imported from the city of Skythane which sits to the north, high in the Gryphspine mountains. [8a] Within the Veins, the largest district of the city, the most commonly traded currencies are coins made of Meteoric Iron known as Motes and Meteors. But these markets are also known to accept stranger currencies such as crude coins made from Ur-Gold, trade beads, Quicksilver Ingots, scales harvested from baby dragons, and of course Glimmerings, the crystal vials of prophecy that serve as the basis of Excelsis's economy.[3a][14a]

The city's most well-known trade route is the Great Excelsis Road which runs the length of the Coast of Tusks all the way up to the Free City of Izalend in the bay of Icefangs.[15a] There have been many attempts by Dawnbringer Crusades to establish settlements along the trade route, some succeeded better than others.[16a][16b][16c]

The city also boasts a stable, albeit treacherous, trade route to the Realm of Shyish. Trade fleets transporting vast quantities of augur-stones leave the port city and head for the Lixian Realmgate in a trek that takes more than a season, these stones are destined for the markets of Lethis in the Underworld of Stygxx. [13a]