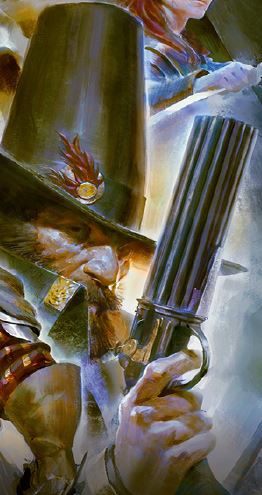 Hanniver Toll is a Witch Hunter for the Order of Azyr.[1]

Hanniver Toll is described as a small man with a broad and plain face, a thin and scruffy beard and grey eyes. He usually wears a black overcoat that seems too large for him, dark blue breeches, a pair of worn travelling boots and a wide-brimmed hat.[1]

Almost a century after the Realmgate Wars, Hanniver Toll was a witch hunter sent to Excelsis along with Kazrug after a patrol of Coldguard was found slaughtered in the depths of the city. The only survivor of that patrol was Corporal Armand Callis, immediately suspected of theft, racketeering and murder. After two troubling encounters, Toll helped proving Callis' innocence and the corruption of Archmage Velorius Kryn and High Arbiter Ortam Vermyre, who were leading the tzeenchian Cult of the Fated Path. Following the battle for the city, Callis left his career as a Freeguild soldier and joined Toll as his new partner.[1]

The battle for Excelsis left the city weak and vulnerable. Silksteel trade had been hampered, a riot was imminent and Toll had to set things right. The witch hunter and Callis went to Marshpoint, a town where members of House Junica and House Dezraed were accusing one another of several crimes, first of which the disappearance of Adrec Junica, son of Lord Kiervaan Junica. Callis and Toll solved the mistery around this disapperance and defeated the White Witch, a dreaded Tomb Banshee of the Ulwhyr Forest.[2]