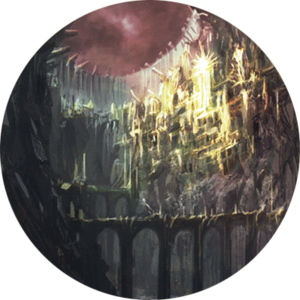 Vindicarum, the Bulwark of Faith, is a thriving center of the Sigmarite faith and one of the Free Cities of Sigmar built in the wake of Sigmar's Tempest. It is located in the Realm of Chamon, carved into the inner slopes of Mount Ketnus.[5a]

After Sigmar's Tempest raged across the Mortal Realms, his Stormhosts set out to claim many lost Realmgates. The Silvershift laying at the heart of Mount Ketnus was once such portal and elements of the Celestial Vindicators valiantly reclaimed it from the forces of Tzeentch that had taken up residence in the volcano.[5a]

The Vindicators build a Stormkeep at the site of their victory, and soon after the Free City of Vindicarum rises around it. Mortals who had survived the horrors of the Age of Chaos flocked to the new city, where they could live in safety behind its many defences.[5a]

The Iron Collar, a series of fortifications, is built along the rim of Mount Ketnus to protect the city. Over the years it aids in shattering attempted invasions from many forces of Chaos. Within the city, Chaos Cults are scourged with extreme prejudice, the city's Stormcast guardians seeing even petty misdemeanours as a step toward falling to the Ruinous Powers.[5a]

The city's greatest tragedy comes from within, rather than without when the Celestial Vindicators execute several thieves on the spot. The mortal denizens of the city riot in reaction to the brutal punishment. In response to the riots, the Celestial Vindicators slew three-quarters of the city in a single night, the event has come to be known as the Great Purge of Vindicarum. The survivors seek solace by becoming Devoted of Sigmar. Many other Stormhosts look unfavourably upon the actions of the Vindicators, but as of yet none have moved to interfere with their rule.[2a][5a]

During the Battle of Vindicarum, Kharadron of Barak-Nar come to the aid of the city and the Celestial Vindicators, aiding them in beating back a force of daemons. Afterwards, the first alliance between a City of Sigmar and Skyport is formed.[5a]

It was targeted by Be'lakor and Legion of the First Prince who sought to sacrifice the city known for its militant Sigmarite faith to the Dark Gods so the Dark Master may be elevated to the position of Everchosen. The forces of the city took massive casualties during the Battle of the Golden Gate when the Realmgate known as the Gate of White Gold was destroyed to unleash Chaos energies into the skies above. However, despite reducing the city into a burning ruin and wiping out most of its population the Legion was defeated at the Siege of Vindicarum due to the intervention of Kharadron allies.[6a][6b]

Vindicarum boasts an ultra-militarised society, centred around a particularly fervent flavour of the Sigmarite cult with an obsession with asceticism and hardship. The only ornaments visible in the city are grim iconography of the Sigmarite faith. Priests can be found continuously chanting from pulpits carved into the inner walls of Mount Ketnus, wherein the city is built, and on mobile altars. Flagellants lash themselves on the streets while the city's penitent citizens toil their lives away in the forges and mines. This fervour is a result of the Greast Purge of Vindicarum, as those who survived the purge live in fear of another massacre, so take Sigmarite virtues of self-sacrifice and penitence to the extreme, to prove their faith. The city's near destruction at the hands of the Be'lakor only worsened this harsh dogma with the Devoted of Sigmar blaming insufficient faith of the citizens as the cause of the disasters resulting in extended mandatory hours of prayer and self-admonishment.[7a]