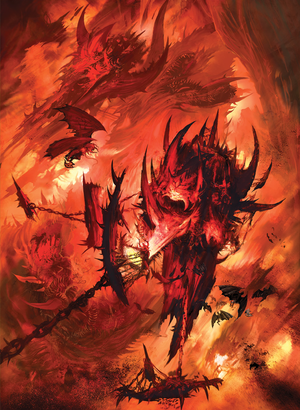 The Realm of Chaos.

The Realm of Chaos is the realm of the Dark Gods, a nightmarish landscape whose trespassers are devoured, grotesquely transformed or damned for all eternity. It is a dimension of magic and raw emotions that feeds on the Mortal Realms.[1][7b]

The kingdom of Khorne is an unending battle field of brass and blood, and the largest in the Realm of Chaos. It is a hellish land of wastelands stained with blood, bone-strewn plains and rage-spewing volcanoes. The landscape is scarred by craters created by the fall of titanic combatants that serve as monuments to their fervour. In this endless fight pit of desolation the greatest warriors, mortal and daemon alike are constantly tested.[2a][5]

Slaanesh's domain can be identified by the elaborate architecture and disturbing, fleshy wastelands. At the heart of his domain there are six circular sub-realms arranged in concentric rings surrounding his godly palace. Each of these sub-realms is seemingly a paradise dedicated to the most celebrated desires of the Dark prince. They contain an hypnotic allure that causes trespassers to be trapped forever in overindulging their desires, turned into both celebrants and defenders of these realities. The only way for a intruder to reach the Palace of Slaanesh at the very center of his territory is to traverse through all six rings[7b]

Unlike the other Chaos Gods, Slaanesh loves to bring visitors into his domains and watching them fall to his minions or the dangers of the land, taking great pleasure in such failing. The very domain gnaws at the body, mind and soul with subtle and devious snares of the pleasures of the realms and, once they have sampled them, they desire ever more, recklessly indulging on them without thinking of the consequences. Those that enter his domain are likely to be trapped there for an eternity and will never leave unchanged.[7b]

The hellish gardens of Slaanesh's domain had souls of those who had wronged the Dark Prince buried in fleshy sediment with only their forearm and lower legs sticking out above the ground. In the past Hellflayers were used to mow down these limbs, provoking an extreme reaction from their victims as these limbs are rich in nerves, usually resulting in a chorus of sudden outraged screams. These limbs are cursed to regrow overnight whenever they are cut and not permitted to die without the gods permission.[7d]

The herds of Steeds of Slaanesh inhabit the glorious pastures, known to have rivers of exotic spirits and scented oils.[7e]

When a mortal dies the Daemonettes often take truths from their dying lips, unique morsels of suffering born of terrifying screams, which takes the form of a currency valued by those in the Circles of Slaanesh, more so than gold or jewels.[7c]

At the heart of Tzeentch's domain lies the Crystal Labyrinth of Tzeentch.[4]

When the Great Horned Rat ascended to the pantheon of the Dark Gods the sprawling skaven capital a verminopolis called the Blight City was merged into the Realm of Chaos.[2b][6]

The skaven used arcane machinery to try to expand their Under-Empire, but the machines went awry and the resulting implosion sank the city to the edges of the Realm of Chaos. From this position that straddled reality the skaven were able to gnaw tunnels into the Mortal Realms and beyond.[2b]

Varanspire is the fortress of Archaon located in the Realm of Chaos and is linked to the nexus of gateways connecting the Mortal Realms known as the Eightpoints. It's so large it spans the Mortal Realms with spiked walls, jagged spire, towers and keeps reaching into horror-choked skies.[3]