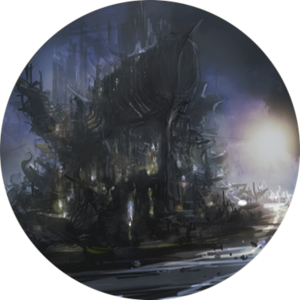 Misthåvn, the City of Scoundrels is a floating City of Sigmar on the Penumbral Sea of the Realm of Ulgu. [1a]

Whilst normally the port is made up of a massive collection of ships moored to the shores of Cape Tenebrax, the city can be broken up or moved across the Penumbral Sea as necessary.[1a]

Misthåvn is ruled by a Grand Conclave but its population is fiercely independent and mock the idea of Azyrite laws being enforced upon them. [3a][4a]The Conclave itself is morally flexible and filled with unscrupulous, and morally flexible characters like rogues, Grey Wizards and similar types. Their 'unconventional' approaches to trade and conquest could seen as borderline blasphemous in other realms.[6a] The many armadas that make up the districts of the city are each ruled by the commanders of these fleets including Aelves of the Scourge Privateers, Humans usually Freeguild Captains, and some by Duardin. [3a][4a]

The Celestial Warbringers are also tolerant of the criminality of the city to a degree and only crack down when deemed necessary by auguries. [4a]

The city attracts unsavory characters and those born in the city learn to be duplicitous and inscrutable. Locals are excessively proud about their reputation for criminality,vice, and deception while looking down on Azyrite laws which they find to be too rigid for surviving in the Shadrac Sea.[3a][4a]

The Seapath Guild is a mysterious organization that guards the knowledge needed to navigate the city's waterways and currents. Blind and cowled helmsmen of the guild guide travelers through what counts as streets in the city safe from dangers such as endlessly hungry monsters that hide in foggy canals who are said to be those that overused magical narcotics of Misthåvn. Each helmsman may demand unique payments for their services ranging from simple trinkets to vials of blood and offered secrets. The Lanternmen are an organization of hooded figures that toll the bells to warn the population of imminenet danger such as when mists roll in bringing terrors within then.[4a]

The people of Misthåvn have learnt to hone their senses other than vision ranging from scent and hearing to other less defined instincts. However some these unique abilities appears to dull in the presence of bright light.[4a]

Misthåvn has a large army of Freeguilds and is famous for its marines [3a]. They are usually press-ganged and trained to specialise in shipboard combat and coastal raiding but are also expected to fight extended campaigns on land. Commanders of the city use auguries delivered to them by Stormcast Eternals and combine these with ulguan trickery to outmaneuver enemies both on land and sea.[4a]

The unnatural senses of the population gives Misthåvn skilled marksmen that could fight in levels of darkness that would make other ranged troops useless although this advantage is less in the presence of bright light. [4a]

Every form of illicit or contraband goods takes place in the city, narcotics, dark illusory magic and even stolen Chaos weapons, are said to trade hands.[1a] Hagg Nar is a major trade partner despite tensions with Khainites and goods traded include shadow-woven silks, illusory charms and prisoners for Khainite sacrifices. [4a]

Hunting of sea birds such as gloomshrikes is common specially among the youth as mean of feeding their families. To shoot through the thick ever-present fog they must close their eyes and let their unique intuition guide the arrows. Resources such as wood, stone and metal are acquired through plunder which is a long standing cultural practice for Misthåvn.[4a]

One of the biggest exports are the strange and diverse Misthåvn Narcotics which first gained ground in the shadowy markets of Misthåvn. But over the years the drugs have swiftly spread to the black markets of many other Free Cities, and from these centers of trade they spread far and wide, to the point they, and drugs much like them, can be found in most major cities of the Mortal Realms.[3b] Scourge Privateers hunt down beasts with magical properties that dwell in the shadow-sea such as the abyssal glatch and the frenzied sawfang. Their corpses are then processed and broken down to produce magical narcotics that can give magical powers when consumed. While this narcotics industry is illegal the Conclave ignores them due to its importance to the city's economy.[4a]

The city's leaders also use their own wares in battle.[2b]

The people of the city are proud of their dubious reputation and all but openly mock the decrees of Azyr. [1a]

The city is formed of sailing ships lashed together to create artificial islands, with districts replaced by 'armadas'. [1a][3a]