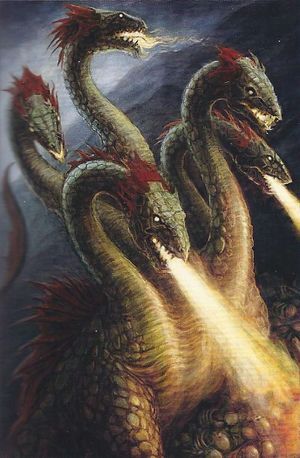 War Hydras are monsters used by the Order Serpentis as war beasts, for their notoriety as being difficult to slay.[1][2a][2b]

It has six heads, each having its own individual set of horns, spikes, maws and frills. It has chest plates, talons on its spined legs, spines on its back and a tail. Their heads have a fiery breath and can spit flesh-melting gouts of flame. They use these, as well as their clawed limbs and razor-sharp fangs to stomp and crush their enemies[1][2a][2b]

Hydras can regenerate at almost an alarming rate, not only regenerating from grievous wounds but also each time one of its heads is chopped off another grows in its place. This regenerative ability is why they have such a reputation for being almost impossible to kill.[1][2a][2b]

It's usually kept in check by two scarred Beastmaster Handlers with their fearsome and Cruel Goads and lashing Whips. They can also stoke the creature into a killing rage, however, they must be careful as its fury can easily be turned back on them.[1][2a][2b]