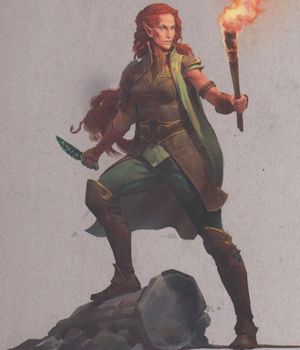 Shevanya Arclis is a Aelf explorer and scholar, who some call a Tomb Raider. [1]

She is tall and fair skinned with russet coloured hair, one side of her face has burn scars, from her chin to just beneath her green eyes. [1d]

Shev grew up in Excelsis and spent a lot of time on the streets, running with a “bad crowd” and learning how to pickpocket, working in the Square of Prophets. [1e]

She was employed by the Golden Lord to lead him to ruins of Quatzhymos, the library city in the jungles of the Taloncoast, said to be the final resting place of Occlesius of Asciltane, the Realm-Walker. [1a] Despite the presence of a large Orruk horde in the ruins, she led her patron to his tomb [1b] but curious, she extracted his false eye and found his soul was still held within it and could talk to her. Concerned about the nature and intentions of the Golden Lord she fled. [1c]

Shev ran into Hanniver Toll, Armand Callis and Arika Zenthe and her corsairs who were seeking Vermyre and a three way fight erupted between the two groups and the orruks. Eventually they retreated with her back to Zenthe’s ship, the Thrice Lucky. [1d] They sailed to Bilgeport, surviving encounters with a massive ghyreshark and Khorne worshipping raiders. [1] There she was captured by the High Captains and given to Ortam Vermyre who needed the information that only Occlesius could give. [1f]

She, Vermyre and his tzaangor allies travelled on a red arrow shaped crystal ship [1f] to the lost city of Xoantica in the Fatescar Mountains [1f] where there would be a final confrontation with Toll and also the ancient custodians of the city. [1]

On her return to Excelsis she and Armand Callis became lovers for a few months before she joined an expedition seeking the Seeing-Stones of Prensis and was considering seeking the Seven Tombs of the Ulkirian Faroahs that her adoptive father had researched. [1g]

Travelling to the Realm of Shyish and short of money, she was enlisted by Rhodus, a merchant of the Silver Circle to break into the mansion of Phylebius Crade, the late High Thaumaturge of the city of Lethis. She entered with Dhowmer, a mage of the Collegiate Arcane, the master-thief Goolan and a thrill seeking noble/knife-woman Lady Nazira El-malia and encountered a number of dangers including mirrors linked to the city of Shadespire. Only the mage and Shevanya would escape the mansion before it was destroyed but she did acquire a ancient magical dagger from the Amethyst Princedoms called Death's ending which had proved effective against Nighthaunts. [2a]

Following the destruction of the mansion, Shevanya was imprisoned in the Black Pit of Lethis before being released into the custody of Witch Hunter Ammos Varon who needed her to help him acquire an artefact hidden in the Stormvault on the Latchkey Isle, the fabled afterlife for thieves and rogues.[3a] They travelled across the plains of Stygxx in the Borosian Steamcrawler of Quentelm Boros [3b] before taking ship on the Pride of Talyn, a steam-tanker. [3c]

Surviving an encounter with the Black Disciple Diresius Kauss[3d] and with her knowledge of the Trickster's Tongue, Shev was able to gain access through the wall that surrouded the isle. [3e] They encountered the Guardians of the Isle, who aided them as they considered that Shev was favoured by the Prince of Cats who had created the paradise. [3f]

As they make their way through a trapped cavern, they are rescued by Jacques vil Granciere‎ who joins them [3g] and leads them to the Tower of a Thousand Doors. [3h] As they work through the traps and rooms, Shev discovers that Ammos is being controlled by Valagharr.[3i]

She is thrown through a door [3i] and is rescued from a mad Skaven Warlock Engineer Pitrikk of the Clans Skryre by the Isle Guardians and together with Jacques, their agent, they form a plan to prevent the rebirth of Valagharr. [3j]

The final confrontation occurs between Diresius and the spirit inhabiting Ammos Varon before Jacques brings Pitrikk and his minions into the battle. In the chaos, Quentelm Boros is able disrupt Ammos/Valagharr with a powerful bomb. [3k]

Shev then stabs him with her magical knife and with his dying words Ammos thanks her and tasks Tavyat with keeping her and the phylactery safe. [3l]

Returning to Lethis she and her companions are taken into custody by the Order of Azyr and Shev receives a visit from Hanniver Toll to confirm her story. He tells her she will be released in a few days and warns her again to keep her head down and out of the way of the Order. [3m]