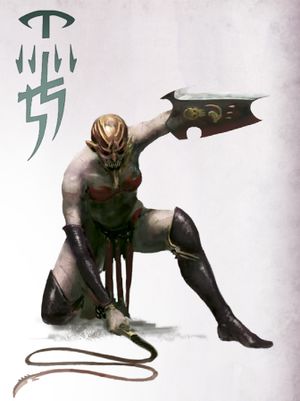 Draichi Ganeth is a sect of the Daughters of Khaine, whose name translates as the bladed killers [1b]

The sects most important temple is at Fuarthorn in the Realm of Ulgu but they have many temples and shrines throughout the Mortal Realms - more than any other Sect[1b]. Most citizens of the varied cities of Sigmar having seen at least one of their spectacular ritual displays of combat or witnessed a war pilgrimage in aid of the forces of Order. [1a] Their destruction of a great horde of orruks outside the city of Kurnothea grants them fame and friends within the same forces of Order. [1a]

Their preference for the decapitation of foes has led to them also been known as the Executioners Cult - unlike other sects they disdain stealth or poison considering it beneath their status as true warriors.[1b]

Often before battle they perform sacred rituals such as:[1c]

They do not bother to colour their armour or clothing, but it is often stained by blood.[1c]

The sect possesses an artefact of power - the Darksword that shines with arcane power, constantly dripping blood.[1c]