From Age of Sigmar - Lexicanum
(Redirected from Frostheart Phoenix)
Jump to: navigation, search 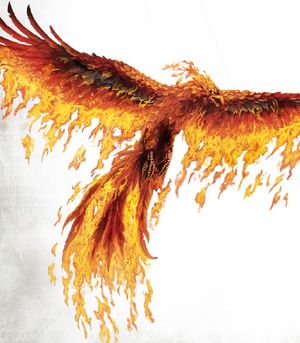 Phoenixes are flying avian imbued with potent magical energy spawned by the Godbeast known as the Ur-Phoenix and worshipped by the aelves of the Phoenix Temple. They can be ridden into battle by Anointed.[4][1a][1b][1c][1d]

Friendly casters imbue these beings with magical energy, making them for likely to resist attacks, when they succeed casting a spell near it.[1a][1b][1c][1d]

Flamespyre Phoenixes are the symbols of these temples and they terrorise their foes by engulfing them in flames. When they attack they sweep low, engulfing foes in stream of flames that turn into a magical, fiery inferno that follows in their wake. If killed these phoenix will be reborn in a blinding burst of light and heat, which they can usually do once per battle. Should it come to it a Flamespyre Phoenix will attack with their Flaming Talons.[1a][1c][2]

As it ages the body of a Phoenix cools and starts to drain heat from its surroundings, turning their plumage from flame to frost and ice becoming a Frostheart Phoenix. Frostheart Phoenix radiate elemental ice, surrounding them with a freezing, blizzard aura that chills enemies slowing them into a crawl until they are encased in ice. They strike their foes from high with Ice-cold Talons, ripping and tearing them to pieces.[1b][1d][3]