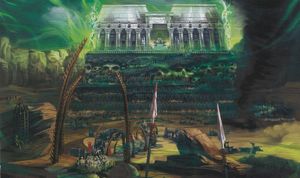 Neferata herself had designed the city, calling up ancient memories to recreate its architecture and style - the grand columns, the rich fluttering silks and the polished marble. All was centered on the Throne-Mount a sprawling, beautiful palace-temple she inhabited and where the mortals of her city would march up to worship her, moving up the Pathway to Punishment, whose malicious displays of still living but disembodied heads even impressed Lascilion, a lord of Slaanesh. Inside its walls, seemingly endless nights of blood-laden depravities would ease her mind and inflame her sense and those chosen to join her. [1]

The city was never silent, rather it groaned and rang with endless creation for the will of its creator never satiated, as she urged the city into transformation after transformation. Nothing was eternal - monuments were created a thousand feet high as well as vaults as big as mountains but then they too would vanish at the command of the queen. [6a]

The Mortarch of Blood cursed the mortal noble houses of the city with a brutal tradition - The Culling of the Firstborn. All first born children of such a house must travel to the Palace of Seven Vultures where they would be tested in variety of ways. Most returned in coffins, carried in mocking silence by a cortege of skeletons, who presented their mutilated remains to their families. Some returned as vampires, slaking their new blood lust on their own families.[6b]

Mannfred, Mortarch of Blood fermented rebelion within many of the noble houses of the city, culminating in an armed uprising which ended in a battle on the Doomwood Way just off the Queensroad with Neferata completely victorious.[6]

At the beginning of the Realmgate Wars, the Chaos Champion Lord Lascilion had breached the long inviolate magical shields and layers of illusions that hidden the city and its inhabitants. Whilst Neferata sent Lord Harkdron to a last doomed defence of her city, she prepared to flee once again when arcane forks of lightning struck the city bringing the Stormcast Eternals to her aid. Led by Lord-Celestant Makvar the Anvils of the Heldenhammer had come to parley with the Queen, a step towards rebuilding the old alliance between Nagash and Sigmar. Whilst Neferata immediately recognised the potential for these new allies, it took precious time for her commands to reach Lord Harkdron who clashed with the new arrivals.[1]

Following the siege, Nagash punished the Queen for her dealings with the Stormcast, allowing Arkhan the Black to take control over the northern sector of the city through his regent, the vampire Venzor[6c] Now that the location of Nulahmia had been revealed, Ruhok a mighty Lord of Khorne led his vast horde across the Cremation Plain in search of the city, ignoring the huge numbers of his warriors that were devoured by the myriad teeth of the plain. [6e]

Neferata causes the Chaos lord to assault the north of her city and at the height of the battle between Venzor and Ruhok's forces, opens the the Annihilation Gate destroying both armies and much of the Northern quarter. As a reward Nagash restores her complete control over the city.[6m]

Living, dead or undead, all within the city bend to the queens will, many love and adore her whilst others serve from fear or desire for the power she can gift.[1] Even her mortal subjects enjoyed lives of excess - wearing robes of silk, eating from plates of gold and drinking from sapphire cups. Even their deaths were it was said, "things of spectacle to be remembered and recorded."[3]

The vampire Noble houses try to ensure that there are enough mortals in the family to sustain the bloodline through direct descent with the firstborn of each generation being given the soulblight curse. [7]

Until the Age of Sigmar no sorcerer or daemon was able to even find the city as it was defended by cloaks of illusion and terror, shrouds of gravefog and mires of liferot guarded its approaches. Those who drew close had ghostly echoes distorting their perceptions and maximising their fears.[3]

When the attack was made by Lord Lascilion, the Wormfields had had sigils and runes seeded in every foot of their expanse, so that the arrows of skeletal regiments atop the Jackel Gate could be loosed with unerring accuracy. Pockets of corpse-gas were hidden in its expanse which necromancers could burst at a gesture whilst nests of marrow-maggots were ready to fasten their leech-like mouths on any invaders. Finally for many centuries mangled and broken corpses had been dumped in the wormfields like refuse and their battered bodies arising from the ground could still cause fear and confusion in enemies.[3]

The buildings of Nulahmia are saturated with death magic through the many sacrifices to Neferata. Spirits and ghosts haunt the city and the unwary traveller or pilgrim can be consumed by hungry shadows. The palace itself has many secret escape routes including one with its own Realmgate.[1]